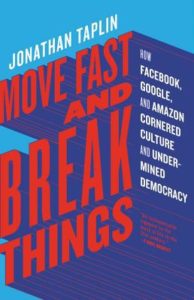 It's official. We can all stop arguing. The internet is a thing (see what I did there), and humanity is more connected than we've ever been before. Personal computers, laptops, smartphones, smart TVs, smart appliances, and WIFI enabled cars are squarely centered in the present. The world has decisively entered the Digital Age. Yet, for every internet advocate, there's someone else arguing for a simpler, better past. And - according to Jonathan Taplin in his new book Move Fast and Break Things: How Facebook, Google, and Amazon Cornered Culture- they may not be far off the mark.

Taplin essentially argues that a small number of internet companies, what he calls the "marketing monoculture", have created a stranglehold on intellectual property. These companies, led by the likes of giants like Facebook, Amazon, and Google, are moving revenues away from content creators to their own marketing and distribution "monopoly platforms". The effects, he argues, have implications not just in the creation and distribution dichotomy but for the future of American democracy as well.Move Fast and Break Things is a deep look at one of the most influential technologies of the 20th and 21st centuries. But it's also a deep look at the history of the American capitalist democracy's relationship with monopolies. Taplin explores the founding fathers' original intent, their arguments, the anti-trust regulations of the early 20th century, and the subsequent change in public and political opinion in the lead-up to our current crisis.Interested in this book? You can find it here at Booksamillion.com.