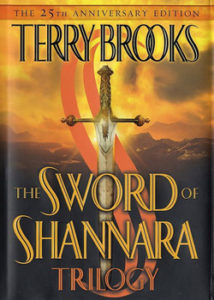 J.R.R. Tolkien’s legacy has cemented itself in our pop culture lexicon, inspiring countless works of literature, film, television, games and music. Tolkien’s impact can be felt throughout, with some of today’s most popular series taking cues from the fantasy visionary.

Often criticized for being too close to Tolkien’s Lord of the Rings epic, Brooks has stated that his protagonists in this series are “cut from the same cloth” as Frodo and Bilbo.“It was Tolkien's genius to reinvent the traditional epic fantasy by making the central character neither God nor hero, but a simple man in search of a way to do the right thing.” Explains Brooks. “I was impressed enough by how it had changed the face of epic fantasy that I never gave a second thought to not using it as the cornerstone of my own writing."

A Song of Ice and Fire

The “R.R.” initials in Martin’s name should immediately give you Tolkien vibes. Martin has called LOTR his “great model” in shaping the overarching plot of the series.Similarities can be drawn between the two, but Martin excels in taking the stage Tolkien set another step forward, adding in his own gloom of historical fiction.“I revere Lord of the Rings,” Martin said. “I reread it every few years, it had an enormous effect on me as a kid. In some sense, when I started this saga I was replying to Tolkien, but even more to his modern imitators.”

After reading LOTR, King was inspired to write his own epic fantasy quest. The most influential aspect of Tolkien's work on King was the immense scope of the overarching adventure.The style of King’s location names in the series and the development of unique language can also be attributed to Tolkien’s influence.

Garnering the same criticism for comparison as The Shannara Chronicles, Paolini’s story includes the classic themes of Tolkien’s epic fantasy novel: a quest, revenge, romance, betrayl, and a special sword.“In my writing, I strive for a lyrical beauty somewhere between Tolkien at his best and Seamus Heaney’s translation of Beoweulf.” Said Paolini.

Although Rowling read LOTR as a teenager and The Hobbit later in her 20s, Rowling admits to not being much of a fan of fantasy.Eagle-eyed fans can, however, point out the similarities between the characters and themes: Wormtongue and Wormtail, Sauron and Voldemort, dementors and Nazgul, and even giant spiders!