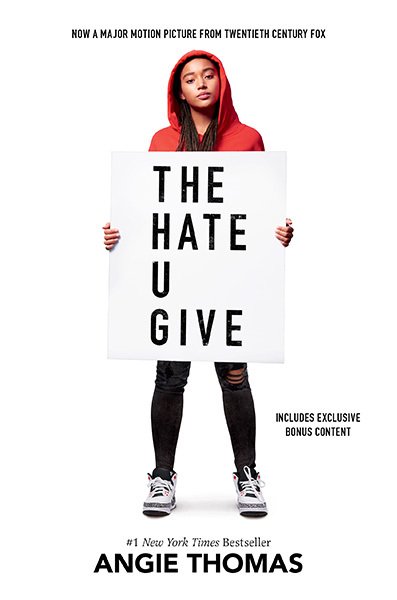 Exclusive Q&A with The Hate U Give Author Angie Thomas

We can’t wait to check out the movie adaptation of Angie Thomas’s remarkable, tragic, and timely novel The Hate U Give. Before you buy your tickets, check out this Q&A with author Angie Thomas, with exclusive bonus questions just for BAM! readers.

What’s it like to see The Hate U Give on the big screen?

It was absolutely surreal to see the story come to life on the screen. I’ve had the opportunity to watch it twice so far, and it still hasn’t really hit me that it’s happening. It’s an honor to know that so many people felt so passionate about what I wrote that they put so much of their time, talent, and efforts into bringing it to life. It’s a humbling experience.

What most surprised you about attending filming?

I was most surprised by the amount of time it takes to get one shot. A scene that lasts a minute can take hours to film. I was also surprised by the fluidity of the process – if a line didn’t work, it could easily be changed in the middle of shooting.

What do you think the movie was able to bring to your story that the book wasn’t, and vice versa?

I think that with the book, things may feel more intimate at times – after all, the reader is in the character’s head. But with the film, the power of some scenes hits harder than it would in the book. For instance, I can describe a protest, but it’s another thing to see hundreds of people participating in one and the range of emotions they present.

How detailed were the movie sets to the novel?

Early in the production process, the director, George Tillman Jr., got my input on just about every set, from the various houses to the neighborhood itself to Starr’s bedroom. I personally went on set and gave insights about her room. When I suggested changes, they actually made them. It was definitely a collaborative process.

We hear you brought your mom to set – any stories from her trip?

My mom loved being on set. She got a chance to hang out with the cast and crew and was just as much a part of the family as I was. I think Amandla has now become her second daughter (lol).

You also visited the Love, Simon set with your friend Becky Albertalli – how did watching her book’s journey into a movie prepare you for yours?

Did you hang out with the cast of the movie while on set?

I got to hang out with a lot of the cast and crew both on set and off set. Everyone was like one big family. We keep in touch even now.