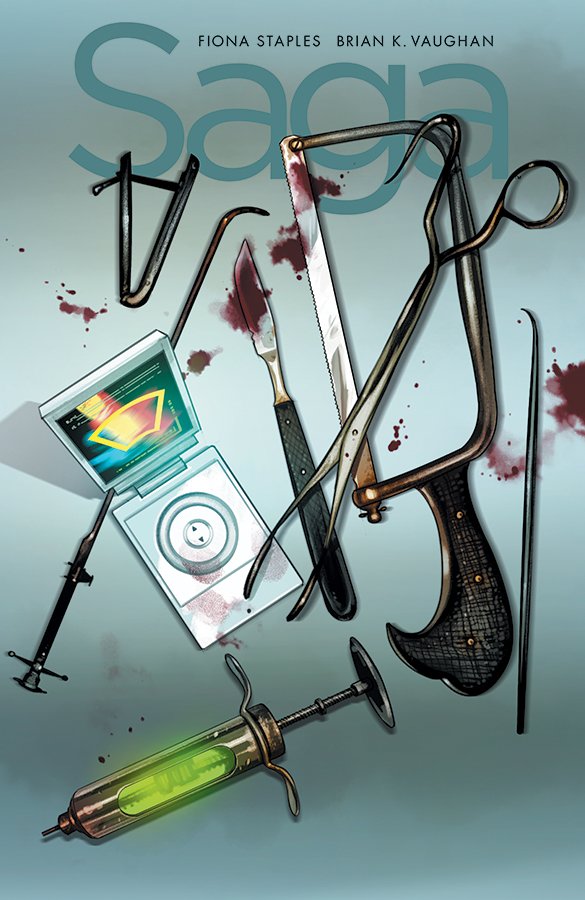 Here at Books-A-Million, we really like to geek out when it comes to comic books, graphic novels, and manga. So when Image Comics gave us the opportunity to interview Brian K. Vaughan, the creator of the award-winning Saga series, and reveal the cover for Saga #46, I jumped at the chance.With the release of Saga Volume 7 at the end of March, Alana, Marko, and Hazel's story is still fresh on my mind. So I sat down with our resident comics expert - Spencer Simpson - and worked out a list of fanboy questions for Brian. Brian - always a good sport - gave us some amazing answers that worked as a perfect introduction to issue 46 cover.

BAM: Brian, I’m really interested in the creative process between artists and writers. Each collaboration seems a bit different. Can you tell me a bit about yours and Fiona's creative process?Brian: For any of you process nerds out there, we describe this in obscene detail in the back of our first hardcover, but here’s the condensed version of how we work. Before each new storyline, Fiona and I talk on the phone (or in person, if we’re at a convention or something) about the general themes we’re going to explore with the next arc. I also like to know what Fiona loved or hated drawing in previous issues, and what she might like to tackle next. I then write pretty detailed scripts for her that provide all of the dialogue and describe how I see each panel, but Fiona always has plenty of freedom to make changes or reinterpret my suggestions, since she’s much smarter than I am. It’s a very tight collaboration, but we also have enough trust to give each other a lot of space to do our respective jobs alone in our quiet rooms. BAM: Are there any specific times something came back from Fiona that changed something you planned?

Brian: This happens a lot. The most significant time was when she sent over her very first image of The Will and Lying Cat. In my mind, they were going to be a fairly traditional duo of amoral bounty hunters, but Fiona instantly imbued them both with so much sympathy and complexity that I knew they were going to be much more important to Hazel’s story than I had originally planned.BAM: Fiona, you effectively do all of the artwork for Saga from illustrations to lettering. You’re also well known for creating in a digital medium. What tools and programs do you use when you’re working on Saga?Fiona: I work on an iMac with a Cintiq pen display. I do the pencilling and inking in Manga Studio (now branded as Clip Studio Paint), and all the colour work in Photoshop. BAM: Are there times when you prefer working physical medium vs. digital?Fiona: Definitely! I actually do all my layouts with paper and pencil, before scanning them into the computer. And I fill up a lot of sketchbooks with rough drawings. But I don't tend to do finished artwork on paper- my inking skills aren't developed enough to get fast or consistent results. Over the last decade I've put way more time into practicing digital art, so it's both more practical and more enjoyable to work that way.BAM: Brian, although you’ve spoken about it before, do you mind letting us know what led to you writing Saga? This story, in some form, has been with you a long time, correct?

Brian: I had been imaging a version of the war between Wreath and Landfall ever since I was bored in class in grade school, but I never dreamed of writing a story set in that universe until I had children. That’s when I realized that an epic sci-fi-fantasy tale would be a great way to talk about the joy and terror of parenthood in a way that would hopefully be relatable to anyone who’s ever tried to create something new, whether that’s a kid, a song or whatever.BAM: Brian, I know you’ve described Saga as Star Wars for perverts, but you and Fiona have navigated away from many of the typical science fiction tropes that occur in alien, world, and even galaxy building. Can you tell us about the influences that inspired the creation of characters and the artwork? Are there other authors and illustrators you owe homage to in Saga?Brian: Man, I really regret making that “Star Wars for perverts” joke! I love the films of George Lucas, among many others, but I’m much more influenced by my own family than I am by the works of other creators.Fiona: Brian's also called it "Star Wars meets Game of Thrones," but I like to think of it as "For Better or For Worse meets Starship Troopers."BAM: Lying Cat is a fan favorite. However, it’s a silent cat for the most part. Effectively, it says one word. There’s a lot of non-verbal communication that occurs with the character. Why do you think Lying Cat has become such a popular character? Did her popularity surprise you?Brian: I’d originally described Lying Cat as “a spotted space panther,” but as soon as I saw Fiona’s genius image of that giant hairless blue house cat, I had a suspicion that L.C. was really going to resonate with readers. It’s a fun concept, but like everything in Saga, it’s Fiona’s interpretation that elevates it to something special. Fiona: People love cats!BAM: what’s been the most impressive cosplay you’ve seen from Saga fans?

There was a Prince Robot IV with a working television-face that still floors me. But we’ve got another costume contest in the back of an upcoming issue of Saga, so I expect our readers to raise the bar even higher this year. BAM: Fiona, you’ve created absolutely beautiful artwork for Saga and some really iconic covers for the book. Is there a specific cover you’ve created for Saga that was especially rewarding or challenging?Fiona: We've done two special wraparound covers: one for issue 25, and one for 37, for some reason. So those were a montage of our whole cast and a big battlefield scene, respectively. They were more work, but fun to see in print.

BAM: Brian, you stated early on that Saga should be a comics-only story. You wanted to make sure it was so outrageous it couldn’t be made into a movie or TV series. Can you explain that mindset? Do you still feel that way?I like adaptations just fine, and if the right filmmakers ever presented us with a way to do Saga as a film or tv series, I suppose Fiona and I would be open to it, but it’s still not a priority at all. I think comics are a vastly superior visual medium to either film or television because we can simultaneously do the boundless spectacle of a big-budget summer Hollywood blockbuster AND the sophisticated adult drama of a great ongoing cable series. Too many new comics feel like they’re just somebody’s unsold spec script. I wanted to make something that celebrated the kind of storytelling our medium can still do better than any other.BAM: Fiona, beyond Saga, are there any exciting projects for you in the near future? Any characters or worlds that you’ve really wanted to do but haven’t had a chance to yet?Fiona: I'm concentrating solely on Saga right now! I fit in the occasional cover, though- most recently a rather sexy Orc Dave for an upcoming Rat Queens one-shot. It's an amazingly funny fantasy series and I did a cover for their very first issue, so it was fun to dip into that world again.BAM: We’re caught up through Volume 7, which came recently. There are some major deaths (No Spoilers!) and in Saga – unlike in a lot of Comics – characters tend to stay dead. Can you talk to us about the process for allowing a character to die, about what leads to that decision?That’s life, right? Sooner or later, we’re all going to die, and there’s no coming back. Fiction used to exist to help prepare us for this inescapable tragedy, but over the years, as characters in popular fiction became “intellectual property” owned and controlled by corporations, these creations became too valuable to ever “die," and I think the whole idea of death in stories became cheapened. But because Fiona and I own and control Saga completely, we can be cruel and vengeful gods, like authors used to be.BAM: Fiona, have you ever tried (or maybe even been successful) in saving a character Brian has put on the chopping block?Fiona: To me, every character death basically takes a month to happen- from when I first read that issue's script, to when I finally wrap up the art and send it off. So I'm kind of dwelling on it the whole time that I'm working on the issue. It feels bad. But that's how I know the story is pretty good. BAM: Brian, do you have a firm ending for the series in mind? You can also just tell us it will go on forever, we’d be happy with that.Ha, thanks! I’ve always known what the last line of the last page of this series will be, and Fiona and I have even discussed a possible date for when that ending might take place, but I can say that it’s hopefully still a very long ways off.BAM: Fiona, without spoiling anything, can you give us a little insight into the cover for issue #46? We're so excited to be able to reveal it here, but we're nervous about what the content may mean for the characters.Fiona: This is a bit of a departure from our typical character portrait! The family is in need of some back alley medical services, so we went with some ghastly-looking antique instruments and one spacey thing.

Saga creators Brian K. Vaughan and Fiona Staples provided Books-A-Million the exclusive cover reveal for Saga #46. The newest issues continue the story of Marko, Alana, and Hazel, each hunted for the terrible crime of love amidst a war torn galaxy.Need to get caught up before new Saga issues drop? Make sure to grab your volumes, books, and special prints at Booksamillion.com.