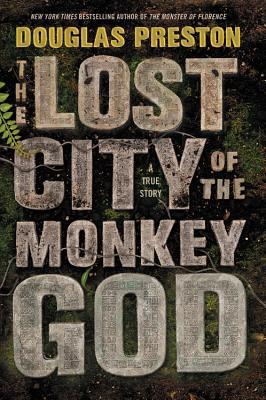 Books-A-Million Reviews "The Lost City of the Monkey God"

Ask most Americans about Central and South America and you’ll notice a visible shiver run through their body. To many it’s almost a boogeyman, a land of fear from your worst nightmare. Despite all its progress and modernization, tales of vicious drug cartels, dangerous jungle environs, and oppressive regimes have tainted the entire continent in the minds of westerners.However, the jungles of South America hold mysteries beyond imagining. Home to ancient, long-vanished civilizations, the stories of lost cities, treasures and history have been amplified by the legacy of colonialism. These stories erected a romantic overlay into South American exploration and archaeology, especially in American society.This is precisely the reason why explorers have risked everything to travel deep into the dangerous jungle environs. And it’s precisely the reason why Douglas Preston chronicled his own journey into the La Mosquitia region of Honduras in 2015 in his new book The Lost City of the Monkey God.Readers should beware, this is not an analysis of the legends surrounding City of the Monkey God or The White City (La Ciudad Blanca). In fact, Preston dedicates relatively little time to actually exploring the legend at all. In as little as a chapter or so, he recounts the various tales, legends, and folklore that likely contributed to the earliest legends of the White City.

Instead, Preston focuses his early efforts on the role of archaeologists to understand the La Mosquitia region. He notates the evolution of belief from Maya civilization to an independent civilization and the questions that inevitably follow. And, eventually, his early chapters pivot to the many explorations to find the legendary White City and find answers about this lost civilization.Finally, Preston recounts his own journey as a member of the scientific exploration team. Surrounded by archaeologists, former British SAS soldiers, and even Honduran special forces, he describes their journey into the heart of darkness.Douglas Preston is a skilled storyteller. While many jungle adventure memoirs turn into a detailed description of horror, danger and injuries, he proves to be a capable observer. While noting the dangerous the team faced, he creates a fascinating story that fully details and colors the technology, the people, and the individual stories.By the end, Preston details the “jungle-choked mounds” and chronicles the objects found by the archaeologists. He takes great pains to explain the importance of the team’s findings to the lay reader, who may not see the significance due to the lack of cut-stone temples and ziggurats most closely associated with ancient South American civilizations.Preston also takes care to detail his fascination with the jungle itself. He documents his marvel at the interconnected nature of the jungle biosphere, almost portraying the jungle as a sentient hive-mind, a character with its own role to play in protecting its reclaimed treasures. Hence, by the end of his journey, he feels like the mystery of the jungle has decreased in stature.Click here to buy.