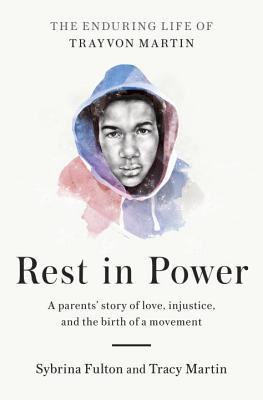 Trayvon Martin’s death at the hands of George Zimmerman was a polarizing event in American politics. It galvanized a renewed discussion at all levels of American society into civil rights and race relations. It spawned the million hoodie march, the Black Lives Matter movement, and a deeper investigation of racial profiling and aggression by police. This single event, the shooting death of a young, black teenager yards from his home, inspired intense debate on both sides.Yet at the heart of this highly politicized event is the death of a young man, a child even. He died, a bullet in his chest, in a dark Florida night after a confrontation with a neighborhood watch captain. That’s the story Sybrina Fulton and Tracy Martin write about in their co-authored book Rest in Power: The Enduring Life of Trayvon Martin. Their story is the story of Trayvon Martin and the fight to define his legacy.Trayvon Martin was a living breathing human being. He had goals and aspirations. According to Tracy and Sybrina, he was loving and always had a big smile. They had taught him the importance of good manners and hard work. He collected Air Jordans. And he made mistakes like every other teenager learning their place and looking to the future.All of these things are important because they give you a sense of Trayvon. The details, relayed by his parents, tell you who he is. Their words strip away the politics to show you the boy at the heart of the matter. They show his humanity and define themselves. Yet, that dark night in Sanford, Florida would change Tracy and Sybrina’s lives forever. In the days and weeks immediately following the deadly shooting, sorrow and mourning gave way to questions and anger. Within days of his death and burial, the family and their new lawyers, specifically Benjamin Crump, began to notice the incongruities in the police investigation. As their son was lowered into his grave, his killer had returned home to sleep in his bed. No arrest. No justice. [caption id="attachment_4061" align="alignright" width="300"]

Tracy Martin (left) and Sybrina Fulton (right)[/caption]Tracy, with the support of a near broken but determined Sybrina and the ever-present and exuberant Ben Crump, began to apply pressure. They started small. Local interviews, rallies, and small events turned into national news coverage and the million hoodie march. Trayvon became a rallying cry against institutional racism across the United States.They began to see results. Slowly, but surely, the 911 tapes were released. The U.S. Justice Department, FBI, and Florida Governor Rick Scott became involved in the case. Things were beginning to happen. Eventually, on April 11, 2012, George Zimmerman was officially charged of second-degree murder by State Attorney Angela Corey.Tracy and Sybrina spend the next several chapters discussing the details of the court case. Their depositions and trial details that often read like true crime. And, in a way, Rest in Power is a true crime book written by first-hand witnesses and participants in the case. We all know the result. The jury delivered a verdict of not guilty on all charges.But Tracy, Sybrina, and their family were not at the courthouse to witness the verdict. They had played witness to the entire court drama. They had listened to every phone call, seen every photo, and relived their son’s death repeatedly. Instead of waiting, they left heartbroken and exhausted. They returned home to anonymity, where they would learn of the not guilty verdict on television. To Tracy and Sybrina, the verdict confirmed the justice system was broken for black Americans. They knew that African Americans, specifically young, black men, were discriminated against by police, by the court, and by the government.However, Trayvon’s legacy is more than a confirmation of a broken justice system. His parents have defined his legacy, one dedicated to curbing gun violence, supporting the families impacted by gun violence, fighting for civil rights and justice in America, and impacting positive change across the country.Trayvon is more than a politicized event. He was a person. He was a son. He was a friend. He was countless other things. And death did not transform him into a senseless statistic. Click here to buy.