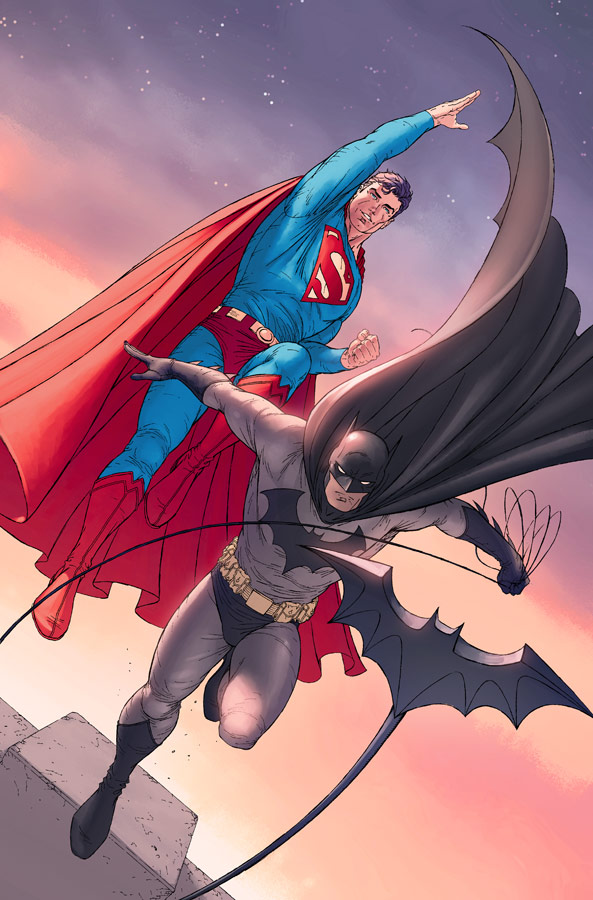 Batman VS Superman: Who's Better?

Humans like to debate. It’s true. We argue over the most senseless and noble causes. Just look over the past 20 years. There are ongoing debates over cloning, climate change, junk food and sugar, technology, advertising, zoos and circuses and countless other topics.But the most important debate happening today is a long-standing topic. For decades, dedicated fans have asked the simple question: Is Batman or Superman the better superhero? And today, we’re going to add our expert analysis to this enlightened debate. We've even selected the Batman and Superman titles that most prove each argument.

Batman is the Caped Crusader, Gotham’s Dark Knight, the greatest detective since Sherlock Holmes but with much cooler gadgets. The black cowl of Batman hides his secret identity as wealthy industrialist Bruce Wayne. While the personality and characterization of the Bruce Wayne/Batman dichotomy can be difficult to pin down, as with any longstanding comic book character, he is arguably the most famous superhero of all time.So why would his ardent supporters proclaim his better than Superman?

Batman is human. He doesn’t have superpowers. He’s never been bitten by a mutated spider or fallen into a vat of chemical waste. At the end of the day, he is just like you or me. He’s seen crime and injustice and been helpless to stop it. He faces the same limitations as any other human but is able to rise above and become something greater. And many argue that makes him both a paragon of the human race and the greatest hero.Source: Batman: Earth One Vol. 1

Bruce Wayne is a self-made superhero. He’s a normal person who believes in the ability of one man to make the world a better place. His very humanity drives him to become something greater than he is. Since he doesn’t have superpowers, he utilizes his genius, his resources and sheer tenacity. He invents and builds the gadgets, tech and vehicles he needs to become greater. Through training and technology, he becomes stronger and faster, capable of fighting the worst Gotham and the world have to offer. And then, he still has to train his body and mind to defend Gotham and the Earth from the greatest threats in the universe.Source: Batman: Year One

So what’s Batman’s greatest superpower? Planning. While he does use brute force when necessary, many of the problems Batman must solve require subtlety, intelligence and impeccable planning. He can be hurt and killed as easily as any other human. And many of his enemies create complex conspiracies to tear Gotham apart. Therefore, Batman has to anticipate the actions of his foes. He lays plans within plans within plans, and he prepares contingencies for every scenario. Source: Batman: Night of the Monster Men

Superman is, well, Superman. He is the Earth’s greatest hero. Strong, invulnerable, he is the almighty protector of all that is good and right in human society. He is the guardian of Earth. Hidden in his identity as Clark Kent, the Pulitzer Prize-winning Daily Planet reporter, Superman reveals himself whenever the world needs him.So why would ardent supporters proclaim him better than Batman?

Superman is, for all intents and purposes, all powerful. He has super strength, invulnerability, flight, laser eyes, and a whole host of other powers. Kal-el could do anything he wants. If he was so included, he could conquer the human race and rule the Earth with an iron fist. Instead, he fights for good. Superman is rigid in his moral code. His strong sense of justice, morality, and righteousness ensure he operates within the boundary of the laws. Despite all the things he could become, is the defender of the defenseless.Source: Kingdom Come

Superman is a god among men. We’ve already established he’s one of the most powerful metahumans on Earth. However, he’s also a very relatable character. As a boy, Clark Kent was raised by humble farmers and works hard for the things he has. Instead of having immense wealth, he has a boss and worries about bills. There are no sports cars or supermodels for Kent. Instead, he’s adopted the best traits of humanity. He’s humble, hard-working and altruistic. He exemplifies all the greatest qualities of humanity. And he shines as a paragon.Source: Superman: Rebirth Vol. 1

Superman (and Metropolis) are representative of the hope and optimism of the American dream. The city often depicted as a shining, beautiful retro-futuristic city gilded with beautiful art deco architectural styles. Metropolis is full of model citizens, idealistic politicians, and faithful police. Corruption is not the running theme. Here, Superman fights external threats of evil geniuses, terrifying technology, and powerful aliens. At its core, Superman and the city he protects is an ideal, a shining city set upon a hill.Source: All-Star Superman

That’s a question that can’t be answered. Why? Because each individual reader will be drawn to one character or the other.Both characters have their merits. And that’s what we’ve tried to highlight. They are two of the most important superheroes in pop culture, and they have legions of ardent, dedicated fans. For now, let’s just be glad we can enjoy both Batman and Superman.