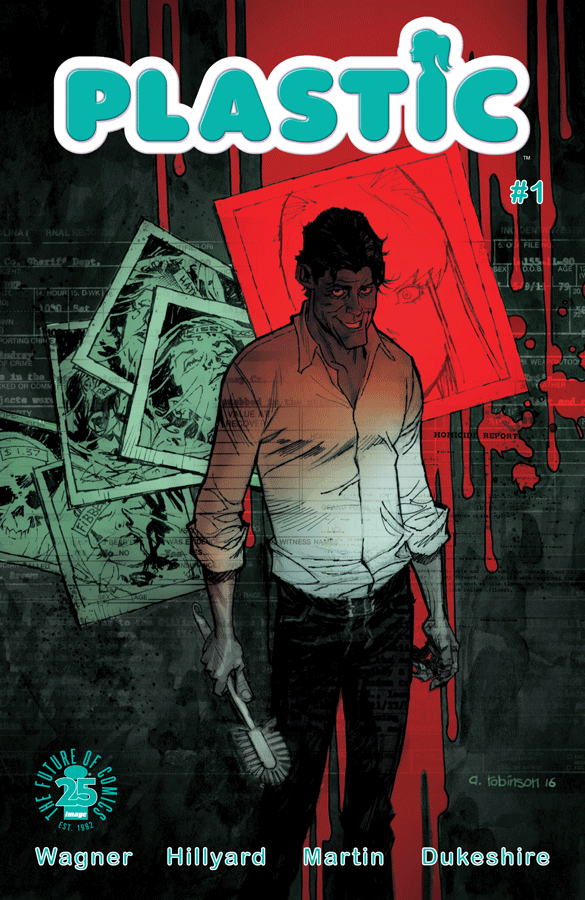 In the world of comics, Doug Wagner is a force to be reckoned with. His work includes Plastic, Legends of the Dark Knight, The Hard Place, and Gun Candy. So when we were given the chance to catchup with him following New York Comic Con, we jumped at the chance to discuss Plastic and the comic’s twisted premise.

If you haven’t read it yet or haven’t completed the story, you can pick up a collection of issues #1-5 here.

Hmmm, this sounds like a trap question to me. Okay, yes. I’m not always the easiest writer to work with. I’m very particular about how I want a story to be delivered, and I may take my work too seriously. But, it’s important to me that any story I’m working on be the best possible experience it can be. When it came to Plastic, I was fortunate enough to bring in an amazing team. Daniel was a given. He and I had worked together before, so I knew going in it would be fun and rewarding. He’s just so incredible talented, and he and I have been able to find this creative space together where we’re able to put our egos aside and focus all of our energy on creating the best material we possibly can. It’s always a joy to work with him.

When it came to colorists, we both desperately wanted to bring in the multiple Eisner and Harvey winning Laura Martin. I’ve known Laura for several years and always hoped we’d work together some day. She’s brilliant in every way you can imagine. With that said, I had no idea how much more she’d bring to the book. Every time we’d get a few pages from her, Daniel and I would immediately get on Skype and gush over how gorgeous the colors were. Again, she’s brilliant.

The rest of the team was just as magnificent. Ed Dukeshire and Andrew Robinson came to the table and asked me what I was hoping to accomplish with this book, then they ran off to their secret genius caves and came back with absolutely amazing work. I can’t tell you how easy this team was to work with and how lucky I am to have had them as part of the Plastic team.

BAM: Plastic is such a well-put-together comic. From the writing to the artwork, the story creates a magnificent balance between the absurdity and the underlying humanity. How did you communicate this vision to them or was it something Daniel and Laura intrinsically understood?

I did my best to communicate my vision in the scripts to Daniel and Laura, but it was also important to me that they were able to realize their vision on the book as well. Although there was a lot of back and forth to get all of us on the same page, the entire team seemed to show up with the same disturbed vision as mine, which made my life so much easier. Daniel and I did spend about two months going back and forth trying to develop the right feel for the first issue. Once we figured it out, the subsequent issues flowed quite easily. I guess that’s what happens when you put together a team of individuals just as disturbed as the writer.

BAM: I was first introduced to Plastic by our comics’ buyer and expert, Spencer. When he provided the recommendation and I asked what it was about, he was hesitant to go into details of the plot without ruining the story. How did you originally pitch Plastic to publishers and fans?

I’ve always kept it pretty simple. Plastic is about a “retired” serial killer that is in love with a blow-up sex doll. Somebody has taken it. At that point, either people cringe and walk away or they lean in and say, “Oh really?” When I was pitching it to Eric Stephenson at Image Comics, I included a few sentences about the themes I was planning on incorporating and a couple thoughts on our main protagonist Edwyn. Luckily for me, that’s all it took.

Listen, I knew from day one that this book wouldn’t be for everyone, and that’s okay. I’ve learned not to attempt to write stories for the masses, but instead, I focus on the stories I want to read. It just so happens that this book is a little more off-center than most. It’s weird, quirky, and filled with odd.

BAM: Plastic essentially reads like a revenge action flick despite some of its more over-the-top plotlines and character development. Was that the way the story came to you?

Being a comic book writer, I tend to write a lot of action, so that’s just part of what I love to do. I wish I could tell you a story about how I spent months agonizing over this premise, but the truth is the entirety of Plastic came to me in two seconds. In the midst of a 14-hour road trip, the muses graced me with their presence and crammed the entire thing into my head. Yep, the whole idea. Sure, it took some tinkering to flush it out into a proper comic book, but the story hasn’t really changed much since the day it was forced upon me.

BAM: Edwyn is such an interesting character. He’s obviously a deranged human being, a former serial killer, who’s kept sane by the love he has for a plastic blow-up sex doll that he’s also projected an identity on. However, we also see that he’s a kind, likeable man who’s found the kind of love most people dream about. Can you talk about how you approached creating and writing this character?

Again, the muses kinda created him for me, but I am pleased to hear you hit on all the major character points I was hoping to convey. To me, I wanted to tap into the primal side I believe every person has in them, but has the sense not to succumb to. Edwyn is a kind soul. I didn’t want him to be the typical serial killer that lacks empathy and gets some sort of sick enjoyment from a kill. I was hoping to present something different. So, I did my best to make Edwyn loveable and identifiable to us non-psychopaths, but also include an over-exaggerated bit of rage we all hide inside from time to time. You know, those times when we hate that SOB that cut us off? Or when we wish an unfortunate accident for the person that parks directly in front of the store? Yeah, we all have those times…right?

BAM: Was there something you wanted readers to experience while they were reading the series?

Well first, I always write with hopes people have a fun time reading my work. Yep, I’m a straight-up escapist kinda guy. However when Daniel and I started this journey together, we were aiming to have the reader experience conflicting emotions on every page, in every scene, throughout each book. We have a love scene that takes place in the creepiest place on Earth. There’s a sweet sunrise scene with a dead animal in the foreground. I believe that’s one of the aspects of this particular book that is intoxicating to some readers. They’re feeling a combination of emotions that shouldn’t go together, and some of us like that feeling.

BAM: Edwyn has a LOT of one-sided conversations. How did you balance writing for a character who was often talking to someone who is either dead or non-existent in a way the reader can understand and follow along?

Ha! Writing those one-sided conversations was one of the most challenging times of my life. I went through multiple passes and depended heavily on my team to help me make sure the dialogue flowed, made sense, and was easy to follow. With all that said, it was a blast working on it. I’d never attempted anything like this before, and if you know me, I love experimenting with my writing. Plus, I’m a writer. I spend a lot of time talking to myself, so some of that just came naturally.

BAM: I imagine you’ve seen a lot of fan reactions to the series. Has there been a reaction or response that stands out?

My favorite to date was a twenty something gruff-looking guy at this year’s Heroes Con. He was drawn to my table by the cover for issue one. He started browsing through the comic and asked me what the book was about. I hit him with the whole “It’s about a ‘retired’ serial killer that’s in love with a blow-up sex doll” thing. His face immediately morphed into a glare of disgust, he put the book down, and walked away…glaring back in absolute revulsion for at least 30 feet. I couldn’t help but find that comical, but I think we’ve established I have a quirky sense of humor…haven’t we?

BAM: Plastic is obviously finished up, but you’re also nearing the end of The Hard Place. What’s your next move? Can you give us an idea for what you might be working on next?

All I can say at this time is that I’m currently working on a couple of new books that will be coming out from Image Comics in 2018. What I’ve learned from the success of Plastic is to aim for the unusual and unique. I don’t plan on straying away from that. As a matter of fact, I’m planning on leaning even harder in that direction.

Sneak Peak at Our Time is Now!