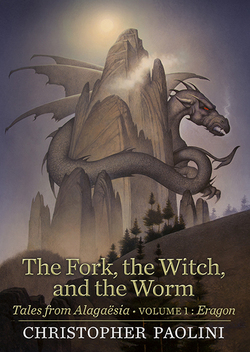 An Exclusive Interview with Christopher Paolini

We can’t wait to get our hands on the latest book from the limitless imagination of Christopher Paolini! In this collection of stories, we return to Alagaësia, the world of the Inheritance Cycle. There will be spells, magic, and—you guessed it—dragons.

Keep reading to find our exclusive Q&A with Paolini, where he tells us about The Fork, the Witch, and the Worm, and what’s coming next.‍

The Fork, the Witch, and the Worm is a book of (not so short) stories. Why did you decide to write stories instead of one longer book? How many more stories do you have planned for this series in the world of Alagaësia?

A bit over two years ago I saw a rather bad movie, and discussing the failings of the plot with my sister lead to me write “The Worm of Kulkaras.” I was pleased with “Worm” but by itself, it was too short to publish. Thus it sat on my computer, alone and abandoned, until the summer of 2018. At that point, I got an urge to write a story about Murtagh. The inspiration came from a tweet I’d made to a fan who was curious about what Murtagh was up to. I made a rather offhand comment about him wielding a magic fork . . . and for whatever reason, the image wouldn’t leave my mind. Thus “A Fork in the Road” was born.

I sent both that and “Worm” off to my publisher. Meanwhile, my sister, Angela, proposed writing a vignette from the point of view of the character Angela the herbalist (whom I based off her). And hey, presto! Before I knew it, we had an actual book-sized object, which I must say, I’m quite proud of.

The framing material for the three stories came from my own desire to see what sorts of problems Eragon has been dealing with since the end of the Inheritance Cycle, as well as wanting to show readers what life at the dragonhold is like.

I have many more stories planned for Alagaësia, some will fit into this short-story format, others will be full-length novels.

What’s in store for the long-awaited Book Five?

As many readers have noticed, a number of unanswered questions remain at the end of Inheritance. Those are the foundation for Book Five, which I have all plotted out. Writing it will be a huge project, so I can’t say when I’ll start that particular project. But when I’m ready, I’ll tackle it.

What was it like to see Eragon adapted for the big screen?

The Eragon movie represents the Fox studio’s version of the story. I had very little involvement with its development. Seeing my world and characters portrayed in a different light was a surreal experience. Yet whatever the movie may or may not be, the books remain untouched, and through them people can enjoy Eragon and Saphira’s adventures the way I envisioned them.

You became interested in folklore at a young age. What are some of your favorite folktales and myths?

Beowulf of course (specifically the Seamus Heaney translation). The Mabinogion Tetralogy, by Evangeline Walton, which is a remarkable retelling of Celtic mythology. Le Morte d’Arthur by Thomas Mallory, which is old enough that I think it qualifies as mythology at this point. The Prose Edda by Snorri Sturluson. Also an enormous amount of Native American stories whose authors I can’t remember, but I was quite fond of tales of the trickster fox.

Can you tell us anything about your new top secret science fiction piece?

Ha! Well, safe to say it’s full of spaceships, aliens, lasers, and . . . tentacles! Overall, it’s my love-letter to the genre in the same way that Eragon was a love-letter to fantasy. The current draft should be finished within the next month or so, which I’m very excited about.

You were 15 when you first started writing Eragon. Do you have any tips for young writers, or those struggling to start writing?

Mainly, don’t give up! There are plenty of skilled writers who never get published because—for whatever reason—they don’t follow through on either the writing or the publishing side of things. Read, write, study the language you’re writing in, plot your stories out beforehand, find others to edit your work, write about the things you love the most, put words on the page every single day . . . and above all else, don’t give up! We all fail. Everyone makes mistakes. That’s the nature of reality. If you can accept that beforehand and say, “Yes, I’m going to write things that are not-so-good. I’m going to mess up. That’s okay. That’s part of the process,” then you have become unstoppable. It’s far too easy to get discouraged when you hit a stumbling block. So don’t get discouraged. Don’t feel as if you’re a bad person because something you wrote doesn’t work. Who cares? Even the best writers produce bad sentences/pages/chapters/books. It happens. But it doesn’t mean you’re bad.

So take a deep breath, stand up tall, square your shoulders, and go forth and be awesome!