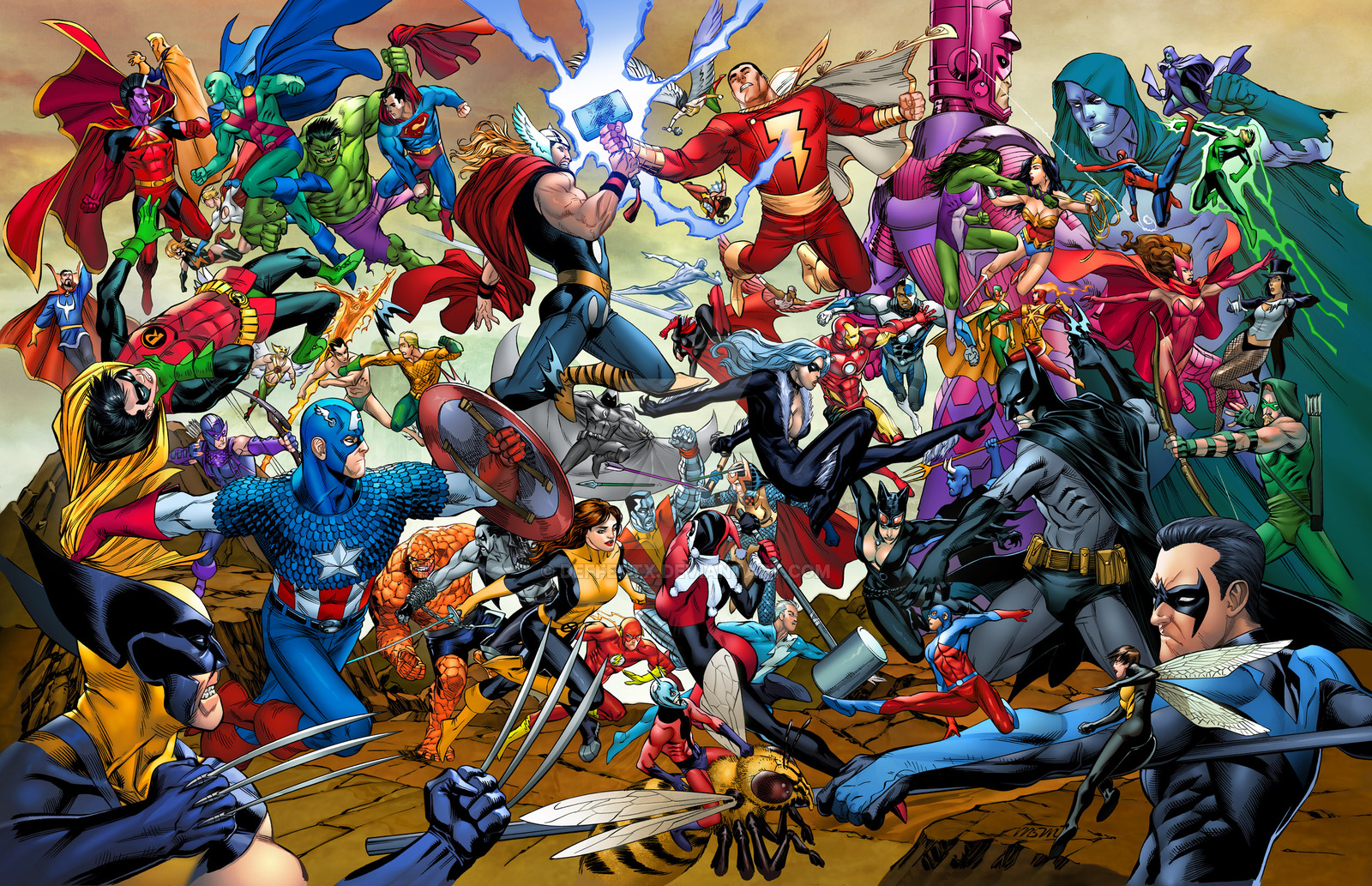 Bad things happen to everyone. Disease, crime, discrimination, and conflict and strife are an intrinsic part of human civilization. In the wake of such events, people are often left wishing some kind of superhero could rescue them and take them out of their situation.Comic books provide an escape for a populace which can often feel put upon, downtrodden, and helpless. There’s a kind of solace in imagination. Benevolent, super-powered beings who fight the ills of the world and universe. But what happens when a superhero meets their match? Are they defeated? Destroyed before their horrified fans and the world subjugated to the rule of their supervillain nemeses? Not usually, but there was that one Old Man Logan storyline…Superheroes don’t live in a vacuum. Most often your favorite superheroes seek out their counterparts and friends. They band together to fight an evil that transcends their own superpowers. They form a team.Teams are a common part of superhero culture. And with the release of Guardians of the Galaxy Vol. 2 and Justice League just over the horizon, we’ve been discussing which teams are the best. We've even included our expert picks for those who want to catch up on each team's most iconic storylines.1. Justice Society of America/Justice League

The Golden Age of Comics was a highpoint for early comics, hence the name. The first superhero team, the Justice Society of America, was formed during this period, but eventually waned in popularity and was canceled in 1951. However, superhero comics didn’t stay unpopular.In the late ‘50s, DC relaunched a number of Golden Age superhero characters. Gardner Fox, the original Justice Society of America writer, was tasked with reviving the team. In the process, Gardner decided to change the name to the Justice League, though the JSA would return in DC’s lineup in the Earth 2 continuity.The Justice League was comprised of DCs flagship heroes, including Wonder Woman, Batman, Superman, Green Lantern, Flash, Aquaman, and Martian Manhunter. However, their impact on superhero comics is incomparable. As a result of Justice League, Marvel’s Stan Lee and Jack Kirby developed their first superhero team: the Fantastic Four.Expert Pick: Justice League Vol. 1: The Extinction Machines2. The Avengers

DC may have been first to create a superhero team, but it’s hard to deny Marvel’s preeminence when it comes to modern pop culture. While names like Superman, Batman, and Wonder Woman are far from obscure, the Avengers lineup has gone from B-team to the top of the A-list. The Avengers was first published in 1963 by Stan Lee and Jack Kirby. They were the third Marvel superhero team following the creation of the Fantastic Four and X-Men. However, instead of creating all new characters from scratch to build the team, Lee and Kirby formed the team from existing characters. Ant Man, The Hulk, and Thor were all first published in 1962 with Wasp and Iron Man following in ’63. Captain America was the oldest, having been published first in the ‘30s and ‘40s, and he joined the team in issue #4.The Avengers would become Marvel’s premier team, but many of their members remained B-List characters. Characters such as Wasp, Ant Man, Iron Man, Black Widow, and Hawkeye wouldn’t become household names until the 2008 release of Iron Man starring Robert Downey Jr. and the subsequent expansion of the MCU.Expert Pick: All New, All Different Avengers, Vol. 3: Civil War II/i>3. X-Men

The X-Men were first created by none other than Jack Kirby and Stan Lee during the height of Marvel’s creation boom. The original X-Men were less than successful. The original series lagged in sales, and the series stopped production at issue 66. That is, until 1975.In ’75, Len Wein and Dave Cockrum reintroduced the X-Men team with new characters, including Colossus, Storm, and the legendary Wolverine. The lineup included a number of characters from varying and diverse experiences. Eventually, Chris Claremont would take over as writer and introduce famous story arcs, such as the Dark Phoenix Saga and Days of Future Past.The X-Men are one of Marvel’s top-selling and most popular teams. They even hold the record for best-selling comic book of all-time (X-Men #1 – 1991). And ultimately this may be because of Marvel’s portrayal of conflict and diversity throughout the X-Men line.Expert Pick: Days of Future Past

Suicide Squad is one of the more interesting teams in DC’s lineup mostly because they really aren’t heroes. That’s right, Suicide Squad is actually made up of characters from DC’s impressive rogue gallery. Take iconic villains, add a cup of shady government covert-operations, and a tablespoon of The Dirty Dozen, and you the antihero premise of Suicide Squad.The Suicide Squad was originally published in 1959 as a heroic team. However, the team was revived in the Legends miniseries by the legendary John Ostrander, Len Wein, and John Byrne. It was the revived 1989 antihero team that we know and love today.The appeal of Suicide Squad is primarily in their ability to work covert operations and skirt the line of good and evil. Throughout the team’s history, they have worked as a government-sanctioned covert ops team and as mercenaries. A series of fantastic writers have also taken pains to explore individual villains and legitimately kill a number of DC’s rogues.Oh, and don’t forget Suicide Squad helps explain how so many of these villains keep getting back out into the world. Expert Pick: Suicide Squad Vol. 1: The Black Vault

The Fantastic Four was the first superhero team produced by Marvel Comics. They were created by Stan Lee and Jack Kirby, who developed a collaborative creative approach at the time that would help define Marvel’s Silver Age of Comics superheroes and character boom. A long running series, the Fantastic Four was published continuously from its 1961 launch until 2015. And many influential comics creators worked on the series. Some of the most influential include Roy Thomas, John Byrne, Chris Claremont, Douglas Moench, George Perez, and Tom DeFalco.The Fantastic Four team went against the grain of early comic book superheroes. While many heroes maintained secret identities and served as a model of human perfection, the Fantastic Four were the opposite. They didn’t use disguises, fought amongst each other, and displayed complex emotions and personalities. They were portrayed as three dimensional characters in a time before the complex personalities of flagship characters were developed. Expert Pick: Fantastic Four Ultimate Collection 1

By the late 1970s, DC was in trouble. DC had once been the undisputed king of comics, but upstart Marvel had flipped the dynamic on its head. The likes of Fantastic Four, Spider-Man, and the relaunched X-Men titles had pushed DC to their limits.When the likes of Marv Wolfman, George Perez, and Len Wein were recruited, DC was hoping to bring some Marvel flair to the brands. And the three comics legends delivered by reviving and revitalizing an old, twice-canceled series: the Teen Titans. The New Teen Titans series was an immediate hit and became one of DC’s flagship brands.The new team developed Marvel-like flair in the comic. Using some of the original characters (Robin, Wonder Girl, and Kid Flash), they revamped the team with new creations and revamped characters Starfire, Raven, Cyborg, and Beast Boy. They also dealt with mature and taboo themes, complex character progression, and diversity.Eventually DC would apply the Teen Titans solution to their entire lineup with the Crisis on Infinite Earths storyline.Expert Pick: Teen Titans: A Celebration of 50 Years

7. Guardians of the Galaxy

Guardians of the Galaxy is by far the newest team on the list. The name, however, was in use from 1969 until 1995. However, the modern Guardians team was assembled by none other than Dan Abnett and Andy Lanning in 2008. The pair brought a number of solo heroes from the Marvel universe together to comprise the team in the post Annihilation: Conquest storyline.While most Marvel teams have a heavy direct affiliation with the partnership of Lee and Kirby, the Guardians only feature two characters from that period: Groot and Adam Warlock. Most other characters were created in the 1970s and later. However, it’s the 2014 Guardians of the Galaxy film that gets the team included on this list. With stellar performances from the likes of Chris Pratt, Dave Bautista, and Bradley Cooper, the film was one of the top 3 grossing films of 2014 and the biggest superhero movie of the year. Not to mention it sets up MCU’s Phase 3.Expert Pick: Guardians of the Galaxy: New Guard Vol. 1: Emperor Quill