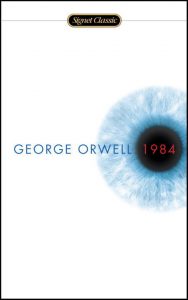 7 Dystopian Novels Everyone Should Read in 2017

2017 is a year of uncertainty. Alternative facts are a thing, trusted news sources are degraded by public officials at all levels, and people clash over the state of our democracy. It’s a year of pronounced uncertainty across the world.So what do people do?They turn to books. And not just any books, readers across the United States have turned to dystopian fiction to find solace. Well, maybe solace isn’t the right word . . . Nevertheless, dystopian fiction is seeing a resurgence in book stores across the country. And it got us thinking, what are the best dystopian fiction novels filling our shelves? So we spoke to our buyers, our experts, and our friends in the publishing industry to answer the question.Here are the top 7 dystopian fiction novels everyone should read in 2017.

1984 is the penultimate classic in the dystopian fiction genre. And it makes sense that this is one of the bestselling books of 2017. For some readers, Kellyanne Conway’s proclamation of “Alternative Facts” and the Bowling Green massacre are frighteningly reminiscent of Oceania’s Newspeak. Through Newspeak, the regime uses simple, incorrect slogans, such as “2+2=5” and “Freedom is Slavery,” to warp the frame of reality. Orwell (a democratic socialist himself) wrote 1984 as a warning against Soviet-style communism and a captive society.In the wake of a surprise Trump political victory, many readers are left thinking about the worst possible destination for American society and politics.Click here to buy.

Aldous Huxley’s Brave New World is a much more likely American dystopian scenario, regardless of which politician is in office. Set in 2540, the novel depicts a world kept docile and compliant by drugs, entertainment, sex, and excess. Instead of a captive population, benevolent dictators rule a relatively uncoerced society. The people of Brave New World love their servitude because it makes them happy. They’re essentially slaves to excess and material wealth.Click here to buy.

Ray Bradbury is a science fiction icon, and he contributed heartily to the dystopian fiction genre. Fahrenheit 451 takes its name from the autoignition temperature of paper, which is exactly the plot of the book. Guy Montag, a fireman, is responsible not for putting out fires, but for starting the fires to burn books. He is on the frontlines to combat intellectualism. Television rules and literature is on the brink of extinction in a world close to total nuclear annihilation. In a world where our new president is a reality television star, Fahrenheit 451 has struck a chord with readers.Click to buy.

It Can’t Happen Here is actually political fiction. But you shouldn't look at it as such. Consider it more like a prequel to dystopian fiction. The novel describes the rise of Berzelius Windrip, his election as President of the United States (defeating Franklin D. Roosevelt no less), and his subsequent totalitarian takeover of the U.S. government. Oh, and Windrip won election after promising drastic economic and social reforms while promoting patriotism and traditional values. Sound familiar? Well it does to many readers. Lewis wrote the book during the rise of fascism in Europe, and many critics have noted a connection to Huey Long, who was assassinated prior to the 1936 presidential election.Click to Buy

The Handmaid’s Tale by Margaret Atwood

Imagine the United States government has been overthrown by an extreme Christian movement and society has been stratified Old Testament-inspired social classes. Welcome, folks, to The Handmaid’s Tale. It’s an extreme, to be certain, but most dystopian fiction is. Told uniquely in the first person point-of-view by a woman named Offred, the story describes a society where women are possessions used for reproduction. Not only are they considered less than men, even wives aren’t allowed to read nor exert any self-control over their lives. It’s a disturbing yet fantastic read. And it’s being made into a Hulu series.Click here to buy.

A Clockwork Orange by Anthony Burgess

Most casual observers will recognize A Clockwork Orange as the unforgettable Stanley Kubrick masterpiece. However, it was originally a book. The equally unforgettable novel painted a near-future England populated with roving gangs, extreme violence, and a political system trying to deal with the problem. Both the book and the movie centered on extreme violence, language, drug use, and even rape. Those are constant themes in the book, and has led to considerable censorship over the years. It’s definitely a mature read.Click here to buy.

V for Vendetta by Alan Moore

The only graphic novel included on the list, V for Vendetta is a masterpiece of modern graphic novels. After a global nuclear war in the late 1980s, the English government has been circumvented by the totalitarian, fascist organization Norsefire. The graphic novel follows the anarchist revolutionary V’s quest to overthrow the Norsefire government and end the police state. V and his signature Guy Fawkes mask have become symbols of opposition and revolution across the world. Even the legendary hacker group Anonymous owes a debt of gratitude to Alan Moore and V for Vendetta.Click here to buy.