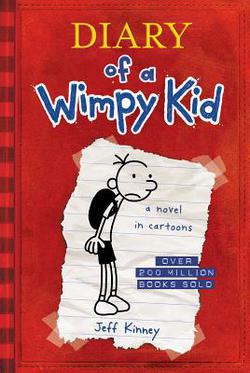 5 Kids Books to Cure the Mid-Summer-Reading-Slump

Have your kids hit a summer-reading-slump? Here's a list of books that just might help them end their summer reading adventure with a bang! From funny books to kids' comics and graphic novels to classics, we've got something for everyone.

Why not start with the wonderful Wimpy Kid books from Books-A-Million Summer Reading Ambassador Jeff Kinney? Start with Book 1 in this bestselling series.Greg Heffley is thrust into middle school, where undersized weaklings share the hallways with kids who are taller, meaner, and already shaving. The hazards of growing up are uniquely revealed through words and drawings as Greg records them in his diary.[button link="#https://www.booksamillion.com/p/Diary-Wimpy-Kid/Jeff-Kinney/9780810993136" newwindow="yes"] Buy Now[/button]

If your son or daughter is already a Wimpy Kid pro, make sure they're caught up with the Wimpy Kid universe with the latest from Jeff Kinney, Diary of an Awesome Friendly Kid.Introducing the newest Wimpy Kid author--Rowley Jefferson! Rowley's best friend Greg Heffley has been chronicling his middle-school years in thirteen Diary of a Wimpy Kid journals . . . and counting. But it's finally time for readers to hear directly from Rowley in a journal of his own. In Diary of an Awesome Friendly Kid, Rowley writes about his experiences and agrees to play the role of biographer for Greg along the way. (After all, one day Greg will be rich and famous, and everyone will want to know his life's story.) But Rowley is a poor choice for the job, and his "biography" of Greg is a hilarious mess.[button link="#https://www.booksamillion.com/p/Diary-Awesome-Friendly-Kid-Rowley/Jeff-Kinney/9781419740275" newwindow="yes"] Buy Now[/button]

3. The Strange Case of the Origami Yoda

In this funny, uncannily wise portrait of the dynamics of a sixth-grade class and of the greatness that sometimes comes in unlikely packages, Dwight, a loser, talks to his classmates via an origami finger puppet of Yoda. If that weren't strange enough, the puppet is uncannily wise and prescient. Origami Yoda predicts the date of a pop quiz, guesses who stole the classroom Shakespeare bust, and saves a classmate from popularity-crushing embarrassment with some well-timed advice. Dwight's classmate Tommy wonders how Yoda can be so smart when Dwight himself is so clueless. With contributions from his puzzled classmates, Tommy assembles this first case file in the blockbuster bestselling Origami Yoda series.[button link="#https://www.booksamillion.com/p/Strange-Case-Origami-Yoda/Tom-Angleberger/9781419715174" newwindow="yes"] Buy Now[/button]

Kids' comics and graphic novels are a great way to get your reluctant reader interested in books. This graphic novel from Newbery Honor-winning author Victoria Jamieson is a great place to start.Eleven-year-old Imogene (Impy) has grown up with two parents working at the Renaissance Faire, and she's eager to begin her own training as a squire. First, though, she'll need to prove her bravery. Luckily Impy has just the quest in mind--she'll go to public school after a life of being homeschooled. But it's not easy to act like a noble knight-in-training in middle school. Impy falls in with a group of girls who seem really nice (until they don't) and starts to be embarrassed of her thrift shop apparel, her family's unusual lifestyle, and their small, messy apartment. Impy has always thought of herself as a heroic knight, but when she does something really mean in order to fit in, she begins to wonder whether she might be more of a dragon after all.[button link="#https://www.booksamillion.com/p/Alls-Faire-Middle-School/Victoria-Jamieson/9780525429999" newwindow="yes"] Buy Now[/button]

This children's classic is sure to get your little reader's nose away from the screen and back into a book in no time. Charlotte's Web is the story of a little girl named Fern who loved a little pig named Wilbur--and of Wilbur's dear friend Charlotte A. Cavatica, a beautiful large grey spider who lived with Wilbur in the barn. With the help of Templeton, the rat who never did anything for anybody unless there was something in it for him, and by a wonderfully clever plan of her own, Charlotte saved the life of Wilbur, who by this time had grown up to quite a pig. How all this comes about is Mr. White's story. It is a story of the magic of childhood on the farm. For generations, children have been entranced with Charlotte the spider, Wilbur the pig, and Fern, the little girl who understood their language.[button link="#https://www.booksamillion.com/p/Charlottes-Web/E-B-White/9780064400558" newwindow="yes"] Buy Now[/button]