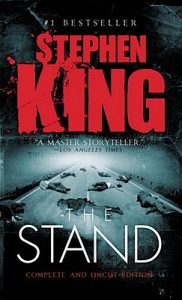 Stephen King was one of the first adult authors I read. I cut my teeth on Fear Street and Lois Duncan, so it was natural to pick up Stephen King when I ran through all the teen screams I could get my greedy hands on. I was a latch key kid in a family of readers; my mom was a Stephen King fan and there was plenty of his books laying around. I don’t remember ever having a conversation with her about content, but as the youngest of four (six years between me and the next kid), I always knew more than I should.Stephen King opened me up to the power of words. I never laid awake at night over something that happened to Christy in a Baby Sitters Club book. But I feared the Librarian Policeman’s silver eyes would appear over my top bunk, ready to take me away because of some over-due book. (A real concern at the time too, as the local library was a bike ride away and I took out more than I could possibly read during the three week checkout period).Stephen King writes horror. But more than that, he writes characters. It’s not the horrors of the supernatural but the evil we do to one another, those pieces of our psyche that we can hide from in the day but can’t run from at night. And always the reminder that past and memories, of a person or place, have a way of affecting and shaping the present. So, dear reader, in honor of his newest book, here are my top 10 from his backlist:

The Stand is probably my favorite Stephen King book. It’s one of the first I read and still re-read every few years. A plague outbreak, survivors banding together, humanity turning on each other, and good versus evil, The Stand is an iconic tale of apocalyptic survival. Oh yeah, and just enough trademark King terror to keep it firmly rooted in horror. He makes a point to show the breakdown of society and adds a little Randle Flagg fantasy for good measure. I know it wasn’t the first but it’s still the best post-apocalyptic plot, and it’s the reason I can’t get enough of them today.Click here to buy >

It is another Stephen King novel I re-read every few years. King writes kids exceptionally well, probably because the unexplained turns us all into vulnerable children, clutching at whatever stuffed talisman we have to keep the bogeyman away. It is a story about loyalty and the ties that bind us to our childhood friends and the power of imagination to fight the monster under the bed. And Pennywise is a doozy of a monster. As terrifying as Tim Curry is in the movie, nothing compares the one King writes.Click here to buy >

The Shining is still the standard in haunted house fiction. The book is a fascinating study in what isolation can do to an already on-the-edge psyche. As an aside, anyone who is a fan of Kubrick’s adaptation needs to see the documentary Room 237; it’s more about Kubrick than King, but it still shows just how many ways you can interpret King’s work and the visual twists and turns that can pull his themes together. King is notoriously unhappy with Kubrick’s movie, but all three are worth the effort.Click here to buy >

I’m cheating by listing these two books together, but if you read one you really need to read both. Desperation and The Regulators are connected by common characters and the same essential evil. The point-of-view characters change up (the kids from Desperation are now the parents in The Regulators, minor characters from one have a more prominent role in the other, that sort of thing), and the plot changes just enough that you get sucked into both and don’t realize you’re reading the same story. An interesting literary experiment. Which one will you like better?Click here to buy Desperation >

Stephen King writes a mean short story, and this collection of four novellas doesn’t disappoint. Read The Library Policeman and see if you ever look at a librarian the same way again.Click here to buy >

After an accident that almost kills him, wealthy Edgar Freemantle retreats to a remote town to paint his demons away, unleashing his dark creativity in the process. Written after the accident that nearly killed him, how much of this novel is autobiographical is up to you. The ending leaves a little to be desired, but King doesn’t phone it in, and the plot and fevered pace of the story make it worth the read.Click here to buy >

History is tied to location and the evil of the past never seems to go away. Revenge, mystery, and a heartbreaking conclusion reminds you that the past doesn’t stay buried.Click here to buy >

Night Shift is my favorite collection of short stories by King. As great as he is at cranking out 1,000 page tomes, he can pack just as much terror and insight into 20 pages. This is King at his creepiest and goriest best.Click here to buy >

I admit, Pet Sematary makes my list more because of the movie than the book itself. One of the first horror movies I saw, it scared me so much I had to read the book, if only to convince myself that Gage was only a character and not a real little boy who wanted to “play” with me. I was never consoled, but the book still holds a special place on my bookshelf.Click here to buy >

The small town setting of Salem's Lot is prime ground for vampires, who run through it like rabid gossip from a sewing circle. Salem’s Lot is a classic vampire tale with hints of the Victorian horror of Dracula rather than Twilight. It’s also one of King’s favorite stories he wrote, and that has to count for something.Click here to buy >Amanda Boyd is the Senior Digital Merchandising Coordinator at Books-A-Million. She is a Stephen King afficionado.