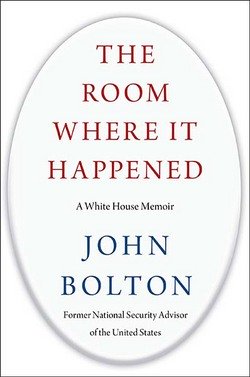 According to USA Today, the Trump administration filed a lawsuit yesterday to stop former Trump national security advisor John Bolton from publishing The Room Where It Happened, his memoir about his time in the White House. This came after Trump called Bolton’s memoir “highly inappropriate,” promising that if published it would be a “criminal problem.” The book is still set for a release date of June 23rd.

As President Trump’s National Security Advisor, John Bolton spent many of his 453 days in the room where it happened. The result is a White House memoir that is the most comprehensive and substantial account of the Trump Administration, and one of the few to date by a top-level official. With almost daily access to the President, John Bolton has produced a precise rendering of his days in and around the Oval Office.

In his memoir, Bolton argues that the House committed impeachment malpractice by keeping their prosecution focused narrowly on Ukraine when Trump’s Ukraine-like transgressions existed across the full range of his foreign policy–and Bolton documents exactly what those were, and attempts by him and others in the Administration to raise alarms about them. “The differences between this presidency and previous ones I had served were stunning,” writes Bolton, who worked for Reagan, Bush 41, and Bush 43.

Chuck Cooper, Bolton’s attorney, defended Bolton’s push to publish the book: “This is a transparent attempt to use national security as a pretext to censor Mr. Bolton, in violation of his constitutional right to speak on matters of the utmost public import.”

Advanced copies of the book have already been sent out for review, and the memoir is already in bookstore warehouses.