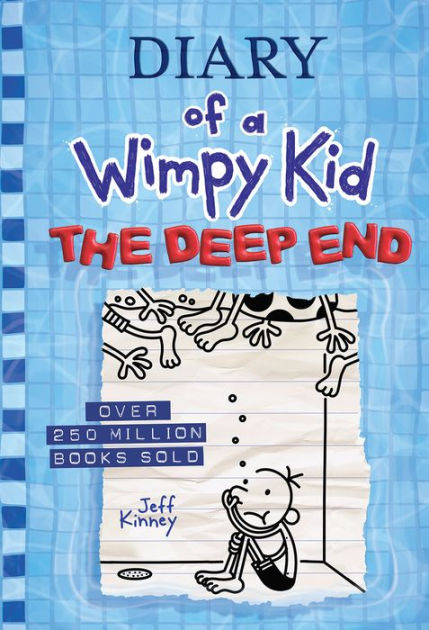 This week, our new releases have something for everyone, no matter what you're looking to read! Since it can get a little overwhelming to walk in a bookstore and see so many new books, we've gathered the top 5 new releases we're most excited about this week.

In The Deep End, Book 15 of the Diary of a Wimpy Kid series from #1 international bestselling author Jeff Kinney, Greg Heffley and his family hit the road for a cross-country camping trip, ​ready for the adventure of a lifetime.

But things take an unexpected turn, and they find themselves stranded at an RV park that's not exactly a summertime paradise. When the skies open up and the water starts to rise, the Heffleys wonder if they can save their vacation--or if they're already in too deep.

As always, Reacher has no particular place to go, and all the time in the world to get there. One morning he ends up in a town near Pleasantville, Tennessee.

But there's nothing pleasant about the place.

In broad daylight Reacher spots a hapless soul walking into an ambush. "It was four against one" . . . so Reacher intervenes, with his own trademark brand of conflict resolution.

The man he saves is Rusty Rutherford, an unassuming IT manager, recently fired after a cyberattack locked up the town's data, records, information . . . and secrets. Rutherford wants to stay put, look innocent, and clear his name.

Reacher is intrigued. There's more to the story. The bad guys who jumped Rutherford are part of something serious and deadly, involving a conspiracy, a cover-up, and murder--all centered on a mousy little guy in a coffee-stained shirt who has no idea what he's up against.

Rule one: if you don't know the trouble you're in, keep Reacher by your side.

3. The Wonder Boy of Whistlestop

A heartwarming novel about secrets of youth rediscovered, hometown memories, and the magical moments in ordinary lives, from the beloved author of Fried Green Tomatoes at the Whistle Stop Cafe

Bud Threadgoode grew up in the bustling little railroad town of Whistle Stop with his mother, Ruth, church-going and proper, and his Aunt Idgie, the fun-loving hell-raiser. Together they ran the town's popular Whistle Stop Cafe, known far and wide for its fun and famous fried green tomatoes. And as Bud often said of his childhood to his daughter Ruthie, "How lucky can you get?"

But sadly, as the railroad yards shut down and Whistle Stop became a ghost town, nothing was left but boarded-up buildings and memories of a happier time.

Then one day, Bud decides to take one last trip, just to see what has become of his beloved Whistle Stop. In so doing, he discovers new friends, as well as surprises about Idgie's life, about Ninny Threadgoode and other beloved Fannie Flagg characters, and about the town itself. He also sets off a series of events, both touching and inspiring, which change his life and the lives of his daughter and many others. Could these events all be just coincidences? Or something else? And can you really go home again?

Accountant Anthony Costello has a talent for manipulating both numbers and people, turning losses into profits, enemies into allies -- and vice versa. When Costello is found murdered in his own home, three suspects had motive. All three had access to his home. And all three women are missing. Are they in the wind -- or in the grave?

Eyes are on Detective Sean Walsh, whose personal connection to the case is stronger than leads to solve it. Neither the powerful bankroll behind Costello nor Walsh's vengeful superior officer can budge the investigation, yet as Walsh continues to dig, he uncovers even more reasons the women have to stay hidden -- from the law, and from each other.

Stone Barrington must track down an enemy intent on disturbing law and order in the latest action-packed thriller from the #1 New York Times bestselling author.

Upon returning from a dangerous coastal adventure, Stone Barrington is looking forward to some normalcy with the leading lady in his life. But when a grisly crime arrives on his doorstep, along with some suspicious new clients eager for his help, Stone realizes peace and quiet are no longer an option.

As it turns out, the mastermind behind the malfeasance rocking New York City and the nation's capital wields a heavy hand of influence. And when Stone is unable to recruit those closest to the case to his side, he is left with few leads and a handful of dead-ends. But with the help of important people in high places--and the expertise of alluring new friends--Stone is more than ready to rise to the occasion.