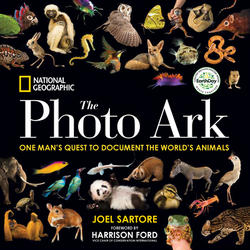 The Photo Ark: One Man's Quest to Document the World's Animals

This morning on Good Morning America, National Geographic photographer Joel Sartore spoke about his massive passion project, The Photo Ark! Joel takes portraits of the world’s endangered species (and those facing extinction), in an effort to connect humans with the animals that need our help the most. The series conveys a powerful message: to know these animals is to save them.

Sartore is committed to documenting every animal in captivity, and he has circled the globe, visiting zoos and wildlife rescue centers, to create studio portraits of thousands of species.

The Photo Ark, features a collection of his photographs from the past 15 years. Paired with the eloquent prose of veteran wildlife writer Douglas Chadwick, and with a foreword by Harrison Ford, Sartore’s animal portraits are riveting: from tiny to mammoth, from the Florida grasshopper sparrow to the greater one-horned rhinoceros. The animals featured in these pages are either destined for extinction or already extinct in the wild but still alive today, thanks to dedication of a heroic group committed to their continued survival. Some of them had never been photographed alive before!

In Sartore’s words, “This is about saving life on earth… And there’s no time to lose.”