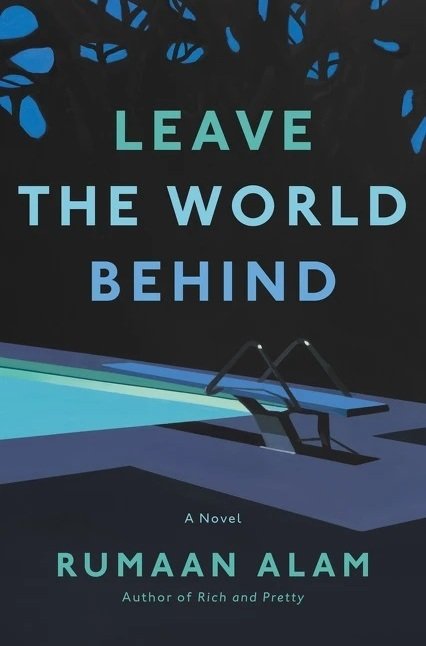 The Finalists for the National Book Award Have Been Announced!

The National Book Awards have announced the twenty-five finalists in all of their five of their categories, but today, we're focusing on the five fiction finalists.

1. Leave the World Behind

A magnetic novel about two families, strangers to each other, who are forced together on a long weekend gone terribly wrong.

Amanda and Clay head out to a remote corner of Long Island expecting a vacation: a quiet reprieve from life in New York City, quality time with their teenage son and daughter, and a taste of the good life in the luxurious home they've rented for the week. But a late-night knock on the door breaks the spell. Ruth and G. H. are an older couple--it's their house, and they've arrived in a panic. They bring the news that a sudden blackout has swept the city. But in this rural area--with the TV and internet now down, and no cell phone service--it's hard to know what to believe.

Should Amanda and Clay trust this couple--and vice versa? What happened back in New York? Is the vacation home, isolated from civilization, a truly safe place for their families? And are they safe from one other?

Suspenseful and provocative, Rumaan Alam's third novel is keenly attuned to the complexities of parenthood, race, and class. Leave the World Behind explores how our closest bonds are reshaped--and unexpected new ones are forged--in moments of crisis.

Contemptuous of their parents, who pass their days in a stupor of liquor, drugs, and sex, the children feel neglected and suffocated at the same time. When a destructive storm descends on the summer estate, the group's ringleaders--including Eve, who narrates the story--decide to run away, leading the younger ones on a dangerous foray into the apocalyptic chaos outside.

As the scenes of devastation begin to mimic events in the dog-eared picture Bible carried around by her beloved little brother, Eve devotes herself to keeping him safe from harm.

A Children's Bible is a prophetic, heartbreaking story of generational divide--and a haunting vision of what awaits us on the far side of Revelation.

3. The Secret Lives of Church Ladies

The Secret Lives of Church Ladies explores the raw and tender places where Black women and girls dare to follow their desires and pursue a momentary reprieve from being good. The nine stories in this collection feature four generations of characters grappling with who they want to be in the world, caught as they are between the church's double standards and their own needs and passions.

There is fourteen-year-old Jael, who has a crush on the preacher's wife. At forty-two, Lyra realizes that her discomfort with her own body stands between her and a new love. As Y2K looms, Caroletta's "same time next year" arrangement with her childhood best friend is tenuous. A serial mistress lays down the ground rules for her married lovers. In the dark shadows of a hospice parking lot, grieving strangers find comfort in each other.

With their secret longings, new love, and forbidden affairs, these church ladies are as seductive as they want to be, as vulnerable as they need to be, as unfaithful and unrepentant as they care to be, and as free as they deserve to be.

Shuggie's mother Agnes walks a wayward path: she is Shuggie's guiding light but a burden for him and his siblings. She dreams of a house with its own front door while she flicks through the pages of the Freemans catalogue, ordering a little happiness on credit, anything to brighten up her grey life. Married to a philandering taxi-driver husband, Agnes keeps her pride by looking good--her beehive, make-up, and pearly-white false teeth offer a glamourous image of a Glaswegian Elizabeth Taylor. But under the surface, Agnes finds increasing solace in drink, and she drains away the lion's share of each week's benefits--all the family has to live on--on cans of extra-strong lager hidden in handbags and poured into tea mugs. Agnes's older children find their own ways to get a safe distance from their mother, abandoning Shuggie to care for her as she swings between alcoholic binges and sobriety. Shuggie is meanwhile struggling to somehow become the normal boy he desperately longs to be, but everyone has realized that he is "no right," a boy with a secret that all but him can see. Agnes is supportive of her son, but her addiction has the power to eclipse everyone close to her--even her beloved Shuggie.

A heartbreaking story of addiction, sexuality, and love, Shuggie Bain is an epic portrayal of a working-class family that is rarely seen in fiction. Recalling the work of douard Louis, Alan Hollinghurst, Frank McCourt, and Hanya Yanagihara, it is a blistering debut by a brilliant novelist who has a powerful and important story to tell.

Willis Wu doesn't perceive himself as a protagonist even in his own life: He's merely Generic Asian man. Sometimes he gets to be Background Oriental Making a Weird Face or even Disgraced Son, but he is always relegated to a prop. Yet every day he leaves his tiny room in a Chinatown SRO and enters the Golden Palace restaurant, where Black and White, a procedural cop show, is in perpetual production. He's a bit player here, too, but he dreams of being Kung Fu Guy--the most respected role that anyone who looks like him can attain. At least that's what he has been told, time and time again. Except by one person, his mother. Who says to him: Be more.
Playful but heartfelt, a send-up of Hollywood tropes and Asian stereotypes, Interior Chinatown is Charles Yu's most moving, daring, and masterly novel yet.

Tune in November 18th for the winner!

Oprah's 7 Books to Help You Through

Top 5 Horror Books to Read Before You Stream