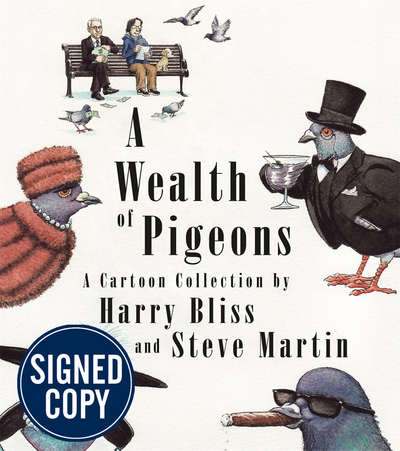 2020 hasn't been the best, but here at BAM, we believe in silver linings. One positive side of this year is that fall is shaping up to have the best new book releases in our 102 years in business, including incredible books from our favorite celebrities. Even better, we have autographed copies available!

Run, don't walk, to buy these books, as they are limited and selling fast! From Steve Martin to Megan Rapinoe, we have the best autographed books for you!

Steve Martin's A Wealth of Pigeons

"I've always looked upon cartooning as comedy's last frontier. I have done stand-up, sketches, movies, monologues, awards show introductions, sound bites, blurbs, talk show appearances, and tweets, but the idea of a one-panel image with or without a caption mystified me. I felt like, yeah, sometimes I'm funny, but there are these other weird freaks who are actually funny. You can understand that I was deeply suspicious of these people who are actually funny."

So writes the multitalented comedian Steve Martin in his introduction to A Wealth of Pigeons. In order to venture into this lauded territory of cartooning, he partnered with the heralded New Yorker cartoonist Harry Bliss. Steve shared caption and cartoon ideas, Harry provided impeccable artwork, and together they created this collection of humorous cartoons and comic strips, with amusing commentary about their collaboration throughout. The result: this gorgeous, funny, singular book, perfect to give as a gift or to buy for yourself.

The legendary frontman of Judas Priest, one of the most successful heavy metal bands of all time, celebrates five decades of heavy metal in this tell-all memoir.

Most priests hear confessions. This one is making his.

Now, he is telling his gospel truth.

Told with Halford's trademark self-deprecating, deadpan Black Country humor, Confess is the story of an extraordinary five decades in the music industry. It is also the tale of unlikely encounters with everybody from Superman to Andy Warhol, Madonna, Jack Nicholson, and the Queen. More than anything else, it's a celebration of the fire and power of heavy metal.

Megan Rapinoe, Olympic gold medalist and two-time Women's World Cup champion, has become a galvanizing force for social change; here, she urges all of us to take up the mantle, with actions big and small, to continue the fight for justice and equality

Megan Rapinoe is one of the world's most talented athletes. But beyond her massive professional success on the soccer field, Rapinoe has become an icon and ally to millions, boldly speaking out on the issues that matter most. In recent years, she's become one of the faces of the equal pay movement and her tireless activism for LGBTQ rights has earned her global support.

In One Life Rapinoe embarks on a thoughtful and unapologetic discussion of social justice and politics. Raised in a conservative small town in northern California, the youngest of six, Rapinoe was four years old when she kicked her first soccer ball. Her parents encouraged her love for the game, but also urged her to volunteer at homeless shelters and food banks. Her passion for community engagement never wavered through high school or college, all the way up to 2016, when she took a knee during the national anthem in solidarity with former NFL player Colin Kaepernick, to protest racial injustice and police brutality - the first high-profile white athlete to do so. The backlash was immediate, but it couldn't compare to the overwhelming support. Rapinoe became a force of social change, both on and off the field.

The Doocy's Happy in a Hurry Cookbook

In this follow up to their New York Times bestseller The Happy Cookbook, Fox & Friends cohost Steve Doocy and his wife, Kathy, share more hilarious stories and offer crowd-pleasing recipes that are quick, easy, and delicious.

Steve Doocy and his wife, Kathy, believe the kitchen and the family dinner table should be happy places where memories are made and shared. But most of us don't have the time to spend hours in the kitchen. Steve and Kathy are no exception, and with The Happy in a Hurry Cookbook, they bring together more than a hundred recipes for favorite comfort foods that come together in a flash--from last-minute entrees to set-it-and-forget-it slow-cooker meals.

The Happy in a Hurry Cookbook includes recipes covering a variety of occasions and favorite foods, from holidays, casseroles, and one-pot meals to chicken, pasta, and desserts, as well a whole chapter devoted to the ultimate comfort ingredient: potatoes. Steve and Kathy also share their clever Happy in a Hurry Hacks, which save prep and cooking time and can be used no matter what recipes you're using. Best of all, they include more hilarious and heartwarming stories from the Doocy family and (some well-known) friends.

"This is my journey," Frampton says of the book. "All I ever wanted to do was play guitar and it's taken me many different places - physically and mentally."

‍Do You Feel Like I Do? is the incredible story of Peter Frampton's positively resilient life and career told in his own words for the first time.The artist shares fascinating stories of his collaborative work and tours with the likes of George Harrison and David Bowie, among others, and reveals both the blessing and curse of Frampton Comes Alive!. And he opens up about becoming the heartthrob and cover boy he never wanted to be, his overcoming substance abuse, and how he's continued to play at the top of his game despite an inflammatory muscle disease.

New York Times bestselling author and Duck Dynasty star Phil Robertson exposes the destructive nature of American politics and calls on Christians to actively participate in advancing the Kingdom of heaven on earth.

We live in an ever-dividing country, a country in which identity politics, creeping socialist policies, and the vast partisan divide threaten the very fabric of America. After decades of political decay and of losing sight of our first principles, the American people are suffering from runaway debt, increased rates of depression, broken families, moral decay, and more. In Jesus Politics, Phil Robertson provides an alternate path: a radical call for Christians to use their freedoms to advance the agenda of the King and win back the soul of America.

Exploring the problems facing our country and how Jesus would respond to each, Robertson offers a manifesto, showing us how to do good by King Jesus, bringing the kingdom of heaven to our homes, neighborhoods, churches, communities, and country. Jesus Politics charges readers to use their time, talents, resources, influence, and votes to protect and advance the policies of King Jesus. Together, Robertson declares that we can win back the soul of America, becoming a nation that proclaims, "In the King we trust."

Shop all of our celebrity signed books!