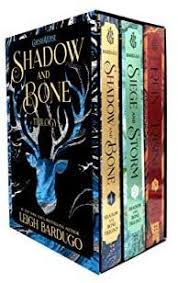 The Grishaverse is Coming to Netflix!

Get excited, because everyone's favorite YA author, Leigh Bardugo, is coming to Netflix! Her two bestselling YA series, Shadow and Bone and Six of Crows, are going to be combined to create a high impact, fantasy Netflix series in April! It might be two distinctive series, but it all falls under the world of the Grishaverse. The book series happen chronologically, so the series will first feature the Shadow and Bone books and then will move onto Six of Crows.

There might be 3 months until April, but there are books to tide you over in the meantime. Better yet, you can get them in two different boxed sets, so you'll have the whole story at the tip of your fingers.

Ketterdam: a bustling hub of international trade where anything can be had for the right price--and no one knows that better than criminal prodigy Kaz Brekker. Kaz is offered a chance at a deadly heist that could make him rich beyond his wildest dreams. But he can't pull it off alone. . . . Kaz's crew of six is the only thing that might stand between the world and destruction--if they don't kill each other first.

Kaz Brekker and his crew have just pulled off a heist so daring even they didn't think they'd survive. But instead of divvying up a fat reward, they're right back to fighting for their lives. Double-crossed and badly weakened, the crew is low on resources, allies, and hope. As powerful forces from around the world descend on Ketterdam to root out the secrets of the dangerous drug known as jurda parem, old rivals and new enemies emerge to challenge Kaz's cunning and test the team's fragile loyalties.

The Trailer for Cruella with Emma Stone is Here!