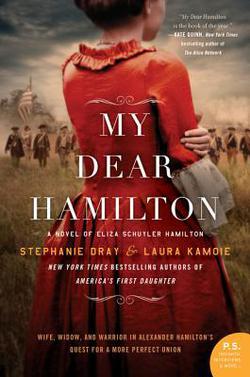 Good Morning America just broke the news that the musical, Hamilton will be coming to Disney+ on July 3rd! Lin-Manuel Miranda’s groundbreaking musical is as revolutionary as its subject, the poor kid from the Caribbean who fought the British, defended the Constitution, and helped found the United States. Fusing hip-hop, pop, R&B, and the best traditions of theater, this once-in-a-generation show broadens the sound of Broadway, reveals the storytelling power of rap, and claims our country’s origins for a diverse new generation. Bob Iger, Executive Chairman of the Walt Disney Company, says that he “can’t think of another work of art in the last decade that’s had the cultural impact of Hamilton.” Now we all get a chance to watch!

In the meantime, there are books to tide you over! The book that inspired the musical was Pulitzer Prize-winning author Ron Chernow’s landmark biography of Alexander Hamilton, the Founding Father who galvanized, inspired, scandalized, and shaped the newborn nation.

Or you can read Stephanie Dray’s historical novel My Dear Hamilton: A Novel of Elizabeth Schuyler Hamilton, the story of Eliza Schuyler Hamilton, a revolutionary woman who, like her new nation, struggled to define herself in the wake of war, betrayal, and tragedy.

If you’re just dying to know more about the musical, you can pick up Hamilton: The Revolution, which includes libretto and photographs from the musical, as well as an account of the creation of the musical, from the composition of the first song of the show in 2009, to opening night in 2015.

In Lin-Manuel Miranda’s words, on July 3rd we’ll all be sitting in the “best seats in the house” and singing along together!