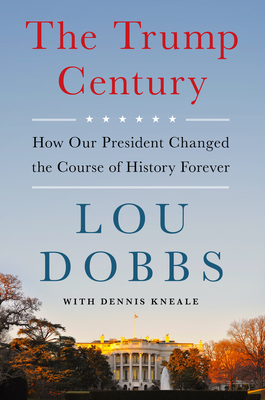 Final Day of the RNC

Today is the final day of the Republican National Convention! From President Trump to Tom Cotton, tonight is sure to be one we won't forget.

Check out the Books of Thursday's Speakers:

Trump: The Art of the Deal

President Donald J. Trump lays out his professional and personal worldview in this classic work--a firsthand account of the rise of America's foremost deal-maker.
‍

‍"I like thinking big. I always have. To me it's very simple: If you're going to be thinking anyway, you might as well think big."--Donald J. Trump

Here is Trump in action--how he runs his organization and how he runs his life--as he meets the people he needs to meet, chats with family and friends, clashes with enemies, and challenges conventional thinking. But even a maverick plays by rules, and Trump has formulated time-tested guidelines for success. He isolates the common elements in his greatest accomplishments; he shatters myths; he names names, spells out the zeros, and fully reveals the deal-maker's art. And throughout, Trump talks--really talks--about how he does it. Trump: The Art of the Deal is an unguarded look at the mind of a brilliant entrepreneur--the ultimate read for anyone interested in the man behind the spotlight.

As the 21st Century began, the world's only superpower was economically adrift, policing the world at the expense of American lives and trillions of dollars, weighed down by one-sided trade and security agreements with Europe and China ratified in a different era.

Elites of both political parties battled over who would manage America's decline from preeminent world power.

In Trump Century, the indomitable Lou Dobbs explains how Trump has steered the debate every day he has been in politics, greatly expanding what Washington thinks is possible. By 2016, the globalist elites demanded no one speak about limiting illegal immigration or securing our borders. The elites told you communist China would soon be like us, and the PC orthodoxy told you what you could or could not say. You were told America's Middle Class could never grow again and wages would be stagnant into perpetuity. Trump reversed all of that as radical Democrats and the Deep State conspired to overthrow his Presidency, as the deadly pandemic raged, and orchestrated street protests and violent riots dominated news headlines.

He has not only made America great again but created a new standard for all future Presidents and likely has set the American agenda for the next hundred years.

Trump Century opens a window into Trump's thinking on the economy, foreign policy, and border security and will energize his allies when they realize the future they've shaped.

Trump: America First gives the reader a firsthand and inside account of the Trump administration's battle for the soul of America.As we face the most critical presidential election of our lifetimes, we find ourselves buried in an avalanche of political spin, candidate talking points, and slick campaign ads.

Then, just as you're ready to give up, along comes a book that makes sense of a political time like none that have come before.Written with the urgency of a countdown and by President Trump's two top outside political advisors and friends, Corey R. Lewandowski and David N. Bossie, Trump: America First blasts through the nonsense to deliver a first-hand account of the Trump presidency and reelection campaign during its most tumultuous time. From the COVID-19 shutdown in March to the campaign leadership shakeup and reset in July, Lewandowski and Bossie are present for every big moment, and now the reader is too.

‍
With unprecedented access to President Trump, the authors take us inside the Oval Office, aboard Air Force One, and backstage at Trump rallies. As they did in their first two blockbuster New York Times bestsellers, Lewandowski and Bossie show a side of the president few get to see.

‍
Along the way, Lewandowski and Bossie also tell of their own battles with the forces aligned against the president, and bring us inside the White House to the rough-and-tumble world of Trump's West Wing.Trump: America First also makes a case for electing Donald Trump to a second term. From revamping our trade with China to replacing NAFTA, from NATO to Kim Jong Un, Donald Trump leaves Joe Biden in the dust.

‍
Written with the authors' usual wit and political insight, America First is truly a book a political book for our time.

An extraordinary journey behind the scenes of Arlington National Cemetery, Senator Tom Cotton's Sacred Duty offers an intimate and inspiring portrait of "The Old Guard," the revered U.S. Army unit whose mission is to honor our country's fallen heroes on the most hallowed ground in America.

Cotton was a platoon leader with the storied 3rd U.S. Infantry Regiment--The Old Guard--between combat tours in Iraq and Afghanistan. At the height of the Iraq Surge, he carried the flag-draped remains of his fallen comrades off of airplanes at Dover Air Force Base, and he laid them to rest in Arlington's famed Section 60, "the saddest acre in America." He also performed hundreds of funerals for veterans of the Greatest Generation, as well as the Korean and Vietnam Wars.

The Old Guard has embodied the ideals of honor and sacrifice across our nation's history. America's oldest active-duty regiment, dating back to 1784, The Old Guard conducts daily military-honor funerals on the 624 rolling acres of Arlington, where generations of American heroes rest. Its soldiers hold themselves to the standard of perfection in sweltering heat, frigid cold, and driving rain. Every funeral is a no-fail, zero-defect mission, whether honoring a legendary general or a humble private.

In researching and writing the book, Cotton returned to Arlington and shadowed the regiment's soldiers, from daily funerals to the state funeral of President George H. W. Bush to the Tomb of the Unknown Soldier, reliving the honor--and the challenges--of duty at the nation's "most sacred shrine."

Part history of The Old Guard, part memoir of Cotton's time at Arlington, part intimate profile of the today's soldiers, Sacred Duty is an unforgettable testament to the timeless power of service and sacrifice to our nation.

Our grandmothers fought for the right to work. Our mothers fought for the choice to be in an office or to stay at home. Our generation is the first to fully embrace and celebrate the fact that our lives are multidimensional. Thanks to the women who came before us and paved the way, we can create the lives we want to lead--which look different for each of us.

I've been fortunate to be able to build my career around my passions, from real estate to fashion. But my professional titles only begin to describe who I am and what I value. I have been an executive and an entrepreneur, but also--and just as importantly--a wife, mother, daughter, and friend. To me, "work" encompasses my efforts to succeed in all of these areas.

After appearing on The Apprentice years ago and receiving a flood of letters from young women asking for guidance, I realized the need for more female leaders to speak out publicly in order to change the way society thinks and talks about "women who work." So I created a forum to do just that. This book evolves the conversation that started on IvankaTrump.com, where so many incredible women (and men ) have shared their experiences, advice, ambitions, and passions.

Women who work lead meetings and train for marathons. We learn how to cook and how to code. We inspire our employees and our children. We innovate at our current jobs and start new businesses.

Women Who Work will equip you with the best skills I've learned from some of the amazing people I've met, on subjects such as identifying opportunities, shifting careers smoothly, negotiating, leading teams, starting companies, managing work and family, and helping change the system to make it better for women--now and in the future. I hope it will inspire you to redefine success and architect a life that honors your individual passions and priorities, in a way only you can.

Through My Father's Eyes

As a beloved evangelist and a respected man of God, Billy Graham stated his purpose in life, and it never wavered: to help people find a personal relationship with God through a saving knowledge of Jesus Christ. This was a calling that only increased over time, and Billy embraced it fully throughout his active ministry and beyond. Yet Billy pursued his life's work, as many men do, amid a similarly significant calling to be a loving husband and father.

While most people knew Billy Graham as America's pastor, Franklin Graham knew him in a different way, as a dad. And while present and future generations will come to their own conclusions about Billy Graham and the legacy that his commitment to Christ has left behind, no one can speak more insightfully or authoritatively on that subject than a son who grew up in the shadow of his father's life and the examples of his father's love. This vulnerable book is a look at both Billy Graham the evangelist and Billy Graham the father and the impact he had on a son who walked in his father's steps while also becoming his own man, leading ministries around the world, all of it based on the foundational lessons his father taught him.

"My father left behind a testimony to God," says Franklin, "a legacy not buried in a grave but still pointing people to a heaven-bound destiny. The Lord will say to my father, and to all who served Him obediently, Well done, good and faithful servant (Matthew 25:21)."