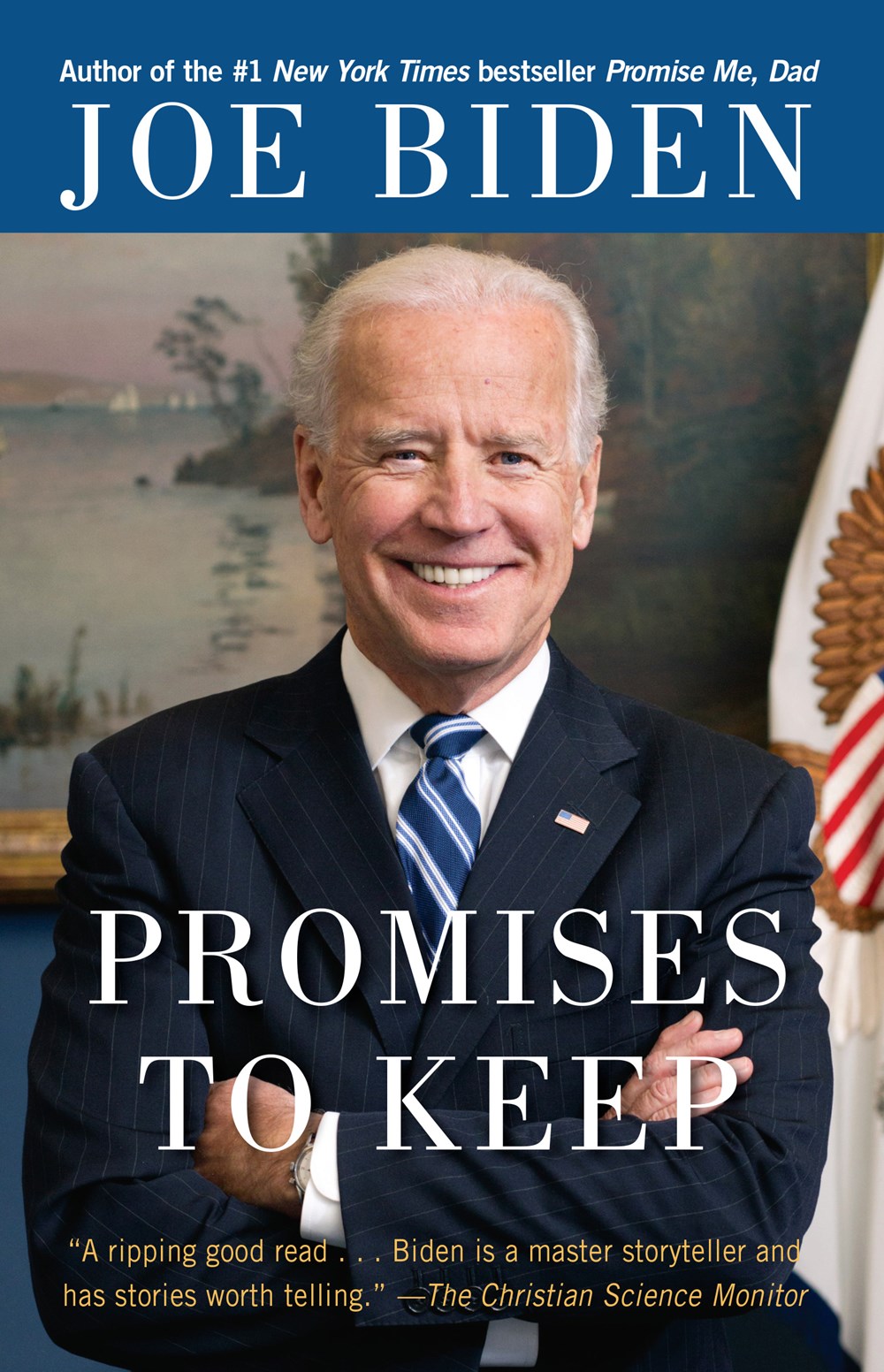 Final Day of the DNC

It's the final day of the DNC!

The theme today is America's Promise. For the final night of the convention, we will hear from those who can speak to Joe Biden’s leadership and character. Joe Biden will speak about his vision  for uniting America to move us forward out of constant chaos and crisis, and for delivering on that promise for all.

Check out the Books of Tuesday's Speakers:

United States Senator Cory Booker makes the case that the virtues of empathy, responsibility, and action must guide our nation toward a brighter future.

He chose to move to a rough neighborhood in Newark, New Jersey, where he worked as a tenants' rights lawyer before winning a seat on the City Council. In 2006, he was elected mayor, and for more than seven years he was the public face of an American city that had gone decades with too little positive national attention and investment. In 2013, Booker became the first African American elected to represent New Jersey in the U.S. Senate.

In United, Cory Booker draws on personal experience to issue a stirring call to reorient our nation and our politics around the principles of compassion and solidarity. He speaks of rising above despair to engage with hope, pursuing our shared mission, and embracing our common destiny.

Here is his account of his own political education, the moments--some entertaining, some heartbreaking, all of them enlightening--that have shaped his civic vision. Here are the lessons Booker learned from the remarkable people who inspired him to serve, men and women whose example fueled his desire to create opportunities for others. Here also are his observations on the issues he cares about most deeply, from race and crime and the crisis of mass incarceration to economic and environmental justice.

"Hope is the active conviction that despair will never have the last word," Booker writes in this galvanizing book. In a world where we too easily lose touch with our neighbors, he argues, we must remember that we all rise or fall together--and that we must move beyond mere tolerance for one another toward a deeper connection: love.

"A fascinating case for a more engaged government, transformed to meet the challenges and possibilities of the twenty-first century." --President William J. Clinton

‍A rallying cry for revolutionizing democracy in the digital age, Citizenville reveals how ordinary Americans can reshape their government for the better. Gavin Newsom, the lieutenant governor of California, argues that today's government is stuck in the last century while--in both the private sector and our personal lives--absolutely everything else has changed. Drawing on wide-ranging interviews with thinkers and politicians, Newsom shows how Americans can transform their government, taking matters into their own hands to dissolve political gridlock even as they produce tangible changes in the real world. Citizenville is a timely road map for restoring American prosperity and for reinventing citizenship in today's networked age.

The meteoric rise of the mayor of a small Midwest city, who defied every pundit's odds with his electrifying run for the presidency, created one of the most surprising candidacies in recent American history. The fact that his New York Times best-selling memoir, Shortest Way Home, didn't read like your typical campaign book only added to "Mayor Pete's" transcendent appeal. Readers everywhere, old and young, came to appreciate the "stirring, honest, and often beautiful" (Jill Lepore, New Yorker) personal stories and gripping mayoral tales, which provided, in lyrical prose, the political and philosophical foundations of his historic campaign.

Now featuring a new introduction and a "Back Home" afterword, in which Buttigieg movingly returns with the reader to his roots in his hometown city of South Bend, Indiana, as well as a transcript of the eulogy for his father, Joseph Buttigieg, Shortest Way Home, already considered a classic of the political memoir form, provides us with a beacon of hope at a time of social despair and political crisis.

The Truths We Told

From one of America's most inspiring political leaders, a book about the core truths that unite us, and the long struggle to discern what those truths are and how best to act upon them, in her own life and across the life of our country.

Senator Kamala Harris's commitment to speaking truth is informed by her upbringing. The daughter of immigrants, she was raised in an Oakland, California community that cared deeply about social justice; her parents--an esteemed economist from Jamaica and an admired cancer researcher from India--met as activists in the civil rights movement when they were graduate students at Berkeley. Growing up, Harris herself never hid her passion for justice, and when she became a prosecutor out of law school, a deputy district attorney, she quickly established herself as one of the most innovative change agents in American law enforcement. She progressed rapidly to become the elected District Attorney for San Francisco, and then the chief law enforcement officer of the state of California as a whole. Known for bringing a voice to the voiceless, she took on the big banks during the foreclosure crisis, winning a historic settlement for California's working families. Her hallmarks were applying a holistic, data-driven approach to many of California's thorniest issues, always eschewing stale "tough on crime" rhetoric as presenting a series of false choices. Neither "tough" nor "soft" but smart on crime became her mantra. Being smart means learning the truths that can make us better as a community, and supporting those truths with all our might. That has been the pole star that guided Harris to a transformational career as the top law enforcement official in California, and it is guiding her now as a transformational United States Senator, grappling with an array of complex issues that affect her state, our country, and the world, from health care and the new economy to immigration, national security, the opioid crisis, and accelerating inequality.

By reckoning with the big challenges we face together, drawing on the hard-won wisdom and insight from her own career and the work of those who have most inspired her, Kamala Harris offers in  a master class in problem solving, in crisis management, and leadership in challenging times. Through the arc of her own life, on into the great work of our day, she communicates a vision of shared struggle, shared purpose, and shared values. In a book rich in many home truths, not least is that a relatively small number of people work very hard to convince a great many of us that we have less in common than we actually do, but it falls to us to look past them and get on with the good work of living our common truth. When we do, our shared effort will continue to sustain us and this great nation, now and in the years to come.

Democratic presidential candidate Joe Biden tells the story of his extraordinary life and career prior to his emergence as Barack Obama's beloved, influential vice president.

"I remain captivated by the possibilities of politics and public service. In fact, I believe that my chosen profession is a noble calling."--Joe Biden

Vice President Joe Biden has both witnessed and participated in a momentous epoch of American history. In Promises to Keep, Joe Biden reveals what these experiences taught him about himself, his colleagues, and the institutions of government.With his customary candor and wit, Biden movingly recounts growing up in a staunchly Catholic multigenerational household in Scranton, Pennsylvania, and Wilmington, Delaware; overcoming personal tragedy, life-threatening illness, and career setbacks; his relationships with presidents, with world leaders, and with lawmakers on both sides of the aisle; and his leadership of powerful Senate committees.

Through these and other recollections, Biden shows us how the guiding principles he learned early in life--to work to make people's lives better; to honor family and faith; to value persistence, candor, and honesty--are the foundation on which he has based his life's work as husband, father, and public servant.

Promises to Keep is an intimate series of reflections from a public servant who surmounted numerous challenges to become one of our most effective leaders and who refuses to be cynical about politics. It is also a stirring testament to the promise of the United States.

A deeply moving memoir about the year that would forever change both a family and a country.

In November 2014, thirteen members of the Biden family gathered on Nantucket for Thanksgiving, a tradition they had been celebrating for the past forty years; it was the one constant in what had become a hectic, scrutinized, and overscheduled life. The Thanksgiving holiday was a much-needed respite, a time to connect, a time to reflect on what the year had brought, and what the future might hold. But this year felt different from all those that had come before. Joe and Jill Biden's eldest son, Beau, had been diagnosed with a malignant brain tumor fifteen months earlier, and his survival was uncertain. "Promise me, Dad," Beau had told his father. "Give me your word that no matter what happens, you're going to be all right." Joe Biden gave him his word.

Promise Me, Dad chronicles the year that followed, which would be the most momentous and challenging in Joe Biden's extraordinary life and career. Vice President Biden traveled more than a hundred thousand miles that year, across the world, dealing with crises in Ukraine, Central America, and Iraq. When a call came from New York, or Capitol Hill, or Kyiv, or Baghdad--"Joe, I need your help"--he responded. For twelve months, while Beau fought for and then lost his life, the vice president balanced the twin imperatives of living up to his responsibilities to his country and his responsibilities to his family. And never far away was the insistent and urgent question of whether he should seek the presidency in 2016.

The year brought real triumph and accomplishment, and wrenching pain. But even in the worst times, Biden was able to lean on the strength of his long, deep bonds with his family, on his faith, and on his deepening friendship with the man in the Oval Office, Barack Obama.

This is a book written not just by the vice president, but by a father, grandfather, friend, and husband. Promise Me, Dad is a story of how family and friendships sustain us and how hope, purpose, and action can guide us through the pain of personal loss into the light of a new future.

The visual chronicle of Joe Biden's eight years as vice president to Barack Obama, revealing in intimate detail who the presumptive 2020 Democratic nominee is as a leader, father, friend, and future President.

This book captures the core of who Joe Biden is as a lifelong public servant, and who he would be as America's next President--featuring photographs from his eight years as one of America's most consequential vice presidents and partner to Barack Obama.
These visually arresting photographs and behind-the-scenes stories show Biden stepping into his own as a leader ready to guide a nation in distress. They also reveal a new dimension to Biden's humanity--as a man whose decency and kindness shines through both tragedy and triumph, whose working-class roots inform his values, and whose candor and approachability enable him to connect with citizens of all kinds. This book traces Biden's vice presidency in unprecedented detail, shedding light on who he is as a political leader and patriot, and also as a father, husband, and friend. It will delight and fascinate readers who yearn for the return of honesty and ethics to the nation's highest offices. As we draw closer to the 2020 presidential elections, this portrait of one of the most influential names in American politics is more timely and important than ever.