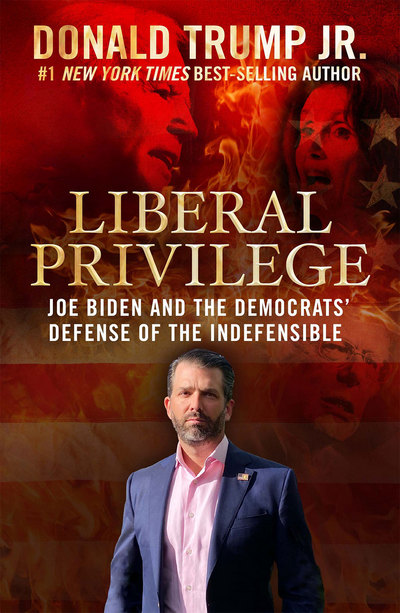 Day One of the RNC

After covering the DNC last week, it is now time for the RNC! Today is the first day of the Republican National Convention, and we'll be giving you a play-by-play of the speakers all week!

Check out the Books of Monday's Speakers:

In this memoir about overcoming adversity in America, the U. S. Senator responsible for creating "opportunity zones" explains how hard work and community growth can drive businesses and end poverty.

‍
Senator Tim Scott knows adversity. As the son of a single mother from North Charleston, South Carolina, he struggled to get through school and had his dreams of a college football career shattered by a car wreck. But thanks to his mother and a few mentors along the way, he learned that "failure isn't failure unless you quit." He also learned that it's hard work and perseverance, not a government handout, that will get you ahead in life.

‍
Today, Senator Scott is the only black Republican in the Senate, and he believes that investment and commerce are the best ways to rebuild our most impoverished communities. This is the idea behind his signature piece of legislation, the "opportunity zones" program, which President Trump has strongly endorsed. The program provides tax incentives for businesses that invest in low-income urban areas, seeking to replace things like welfare and government assistance.

‍
In Opportunity Knocks, Senator Scott will tell his life story with a focus on adversity and opportunity. He will teach readers about the principles of hard work and hope while addressing the dangers of veering too far toward socialist policies. The book will also not shy away from discussions of racism and racial inequality in the United States and will recount some of Senator Scott's own brushes with racism as well as the many discussions he's had with people who want to help, including President Trump.

Firebrand : Dispatches from the Front Lines of the Maga Revolution

In a scathingly funny account of his time in the Washington swamp, Florida firebrand Matt Gaetz, one of President Trump's key supporters in Congress, gleefully skewers the enemies of the MAGA revolution and lays out his own vision for the future of the populist movement.

"This book is your invitation to the front lines of our fight. Join me with ideas, energy, images, and stories. This is not my chronological diary. You can watch me on television for that. This is how we prevail with joy--and exactly how an exciting president is leading the way against all odds." --Congressman Matt Gaetz

With All Due Respect - Defending America with Grit and Grace

A revealing, dramatic, deeply personal book about the most significant events of our time, written by the former United States Ambassador to the United Nations

Nikki Haley is widely admired for her forthright manner ("With all due respect, I don't get confused"), her sensitive approach to tragic events, and her confident representation of America's interests as our Ambassador to the United Nations during times of crisis and consequence.

In this book, Haley offers a first-hand perspective on major national and international matters, as well as a behind-the-scenes account of her tenure in the Trump administration.

This book reveals a woman who can hold her own--and better--in domestic and international power politics, a diplomat who is unafraid to take a principled stand even when it is unpopular, and a leader who seeks to bring Americans together in divisive times.

After an eleven-year-old Kimberly Guilfoyle lost her mother to leukemia, her dad wanted her to become as resilient and self-empowered as she could be. He wisely taught her to build a solid case for the things she wanted. That childhood lesson led her to become the fearless advocate and quick-thinking spitfire she is today. In Making the Case, Guilfoyle interweaves stories and anecdotes from her life and career with practical advice that can help you win arguments, get what you want, help others along the way, and come out ahead in any situation.

Learning how to state your case effectively is not just important for lawyers--it's something everybody should know how to do, no matter what stage of life they are in. From landing her dream job right out of school, switching careers seamlessly midstream, and managing personal finances for greater growth and stability to divorcing amicably and teaching her young child to advocate for himself, Guilfoyle has been there and done it. Now she shares those stories, showing you how to organize your thoughts and plans, have meaningful discussions with the people around you, and achieve your goals in all aspects of your life. You'll also learn the tips and strategies that make the best advocates so successful.

The movement that brought Donald Trump to the White House has better ideas than the old right or the new left. It's time that the rest of America started listening.

Fed up with Silicon Valley, the media, liberal higher education, the military-industrial complex, Twitter mobs, swamp monsters, Big Pharma, out-of-control prosecutors, and gun-grabbing fascists, ordinary Americans miss the days when America cared about rule of the people, by the people, and for the people. Remember when you didn't feel bombarded on all sides by coastal billionaires and their government stooges? The MAGA Doctrine urges an overdue restoration of self-rule by a populace long taken for granted by its rulers.

Turning Point USA founder and social media superstar Charlie Kirk explains once and for all why a New York real estate magnate found an audience among young conservatives all over the country. Trump and his allies are working to protect all the small things that both parties dismissed: local businesses, families, churches, and the rights of the individual. Kirk explains why it took a reality TV superstar to see past the sclerotic and power-hungry institutions, from the United Nations and Google to Harvard and Viacom, working to crush real America. The Trump Doctrine is all about giving you a say in the future of America and a hand in making it happen.

As the mainstream media keep churning out lies about the "real reasons" behind the new conservative agenda, Charlie Kirk's The MAGA Doctrine is a powerful reminder of the true narrative of freedom and greatness that swept Donald Trump to the presidency.

Note: Sean Parnell is a prominent fiction writer, so we've decided to include his upcoming fiction book!

Special operative Eric Steele must stop a foreign assassin targeting top-tier U.S. military personnel and derail a strike aimed at the heart of America in this third electrifying military thriller from the New York Times bestselling author of All Out War, perfect for fans of Brad Thor, Vince Flynn, and Tom Clancy

Two months after taking down terrorist Aleksandr Zakayev, Eric Steele is back in action. Though he is completing his Alpha assignments with the same deadly efficiency as always, he has lingering questions about his missing father--and his own future in the Program.

When Steele gets the alert that a fellow Alpha is in serious trouble, he rushes to Paris--only to arrive too late. Jonathan Raines, Stalker Six, is dead, the victim of a brutal attack. While on leave in the City of Light, Raines had met an attractive art historian who lured him into a trap. Before she vanished, the mysterious woman left a warning for anyone from the Alpha program who might follow her.

One of the best and most effective warriors in the top-secret Program, Steele has been trained to take on enemies, and no threat will deter him from avenging a fallen brother. But the killer won't be easy to find. The search takes Steele around the world, from France, to the Adriatic coast of Italy, to the outskirts of Aleppo, Syria, and to a top-secret prison in Russia-- where, unexpectedly, he finds more clues about his father--before finally taking him back to the streets of Washington, D.C.

No one is safe while the killer is on the loose, and the danger is heightened when Steele discovers intel that killing Alphas is just the beginning of a larger, more nefarious plot. The real target is much, much bigger--and it's up to Steele to prevent catastrophe before he becomes the next elite warrior to fall.

While everyday Americans strive to make an honest living by working hard, liberals within the swamp have perfected a way of barely working while elevating themselves above all of us. Liberal Priviledge will take you behind the scenes of the swamp, just as the nation gears up for the next presidential election.

Read about the countless liberal scandals, years of entrenched racism in the democrat party and decades of failed polices that will paint a stark picture of Liberal Priviledge.

As President Donald J. Trump seeks a second term based on real accomplishments, learn about the facts the media refuses to cover.

Few American families have accomplished so little and benefited so much as the Biden’s. Through corruption, grift, and sheer greed - Joe Biden, Hunter, and the rest of the clan have exemplified Liberal Priviledge.