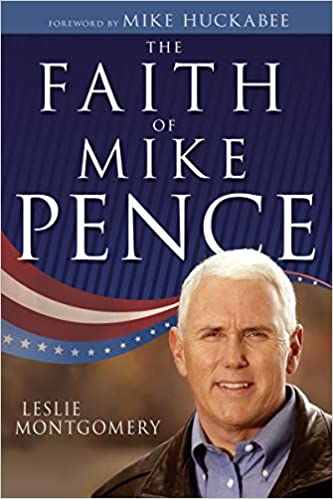 After covering the DNC last week, it is now time for the RNC! Today is the third day of the Republican National Convention, and the line-up includes everyone from Mike Pence to Dan Crenshaw.

Check out the Books of Wednesday's Speakers:

The Faith of Mike Pence

Several books have been published about Vice President Mike Pence, but none have touched upon what may be the most fascinating aspect of our nation's second in command: his deep faith.

The Faith of Mike Pence offers an intimate look at the man who calls himself "a Christian, a conservative, and a Republican, in that order." Author Leslie Montgomery details Pence's spiritual journey and examines how the vice president's commitment to Christ has been a key component in his life as a husband, father, and public servant. Montgomery examines Pence's encounters with politicos and evangelistic leaders such as James Dobson and Charles Lake. She shows the role of Pence's faith in running for various offices, implementing faith-based initiatives, and responding to 9/11, the war in Afghanistan and Iraq, and the infamous Anthrax scare in Congress that directly affected him.

The Faith of Mike Pence is a powerful account of one of the most conservative vice presidents in American history, with exclusive interviews and insightful commentary from friends, family, and colleagues. It is a serious and moving reflection about one of America's most admired and respected politicians.

Marlon Bundo's Day in the Life of the Vice President

From the moment he hopped into the home of America's "Second Family," black-and-white bunny rabbit Marlon Bundo captured the hearts of Vice President Mike Pence, his wife Karen, and his children Michael, Charlotte, and Audrey. But little Marlon Bundo isn't just a family pet: like Peter Rabbit and Bugs Bunny before him, Marlon--or BOTUS (Bunny of the United States)--is a national celebrity With his appearances at official White House events, his rides on Air Force 2, and his popular Instagram account, Marlon Bundo has become a beloved member of the Trump-Pence administration.

So how does a bunny experience a day in the life of the Vice President? Now young readers can follow Marlon Bundo along as he hops after "Grampa" (Vice President Mike Pence) in this delightful story penned by Charlotte Pence and illustrated faithfully with watercolors from the "Second Lady" herself, Karen Pence.

The Mind of a Conservative Woman

Reject our society's liberal bias against conservative women and learn how traditional principles will secure a better future for us all with this inspiring guide from a political powerhouse.

‍
The Mind of a Conservative Woman challenges women to improve their place in life and open doors for themselves and the next generation through the courage of their convictions. Senator Blackburn expounds upon why beliefs labeled as "traditional" have common ground and can improve all of society, such as:

Though it is politically liberal women who receive the attention of left-leaning media and universities, it is conservatism that guarantees what most women hold dear. Blackburn addresses the frustrations of working women and the false perceptions of women presented by the media in general.
Her maxim "Leave Things in Better Shape Than You Found Them" will challenge you to improve your place in life and create opportunities you never dreamed possible for yourself and those around you.

‍
In 2012, on his third tour of duty, an improvised explosive device left Dan Crenshaw's right eye destroyed and his left blinded. Only through the careful hand of his surgeons, and what doctors called a miracle, did Crenshaw's left eye recover partial vision. And yet, he persevered, completing two more deployments. Why? There are certain stories we tell ourselves about the hardships we face -- we can become paralyzed by adversity or we can adapt and overcome. We can be fragile or we can find our fortitude. Crenshaw delivers a set of lessons to help you do just that.Most people's everyday challenges aren't as extreme as surviving combat, and yet our society is more fragile than ever: exploding with outrage, drowning in micro-aggressions, and devolving into divisive mob politics. The American spirit -- long characterized by grit and fortitude -- is unraveling. We must fix it.

That's exactly what Crenshaw accomplishes with Fortitude. This book isn't about the problem, it's about the solution. And that solution begins with each and every one of us. We must all lighten up, toughen up, and begin treating our fellow Americans with respect and grace.

Fortitude is a no-nonsense advice book for finding the strength to deal with everything from menial daily frustrations to truly difficult challenges. More than that, it is a roadmap for a more resilient American culture. With meditations on perseverance, failure, and finding much-needed heroes, the book is the antidote for a prevailing "safety culture" of trigger warnings and safe spaces. Interspersed with lessons from history and psychology is Crenshaw's own story of how an average American kid from the Houston suburbs went from war zones to the halls of Congress -- and managed to navigate his path with a sense of humor and an even greater sense that, no matter what anyone else around us says or does, we are in control of our own destiny.