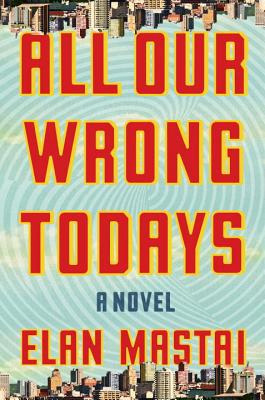 Books-A-Million Reviews: "All Our Wrong Todays" by Elan Mastai

Utopia is, by definition, perfect. Economic, social, political, and judicial equality in all facets of society. It's a dream, but an unattainable dream. Or, at least, so we've always been led to believe. But that's exactly what you would need to believe to survive in a dystopian wasteland, right?These are the complex questions presented in Elan Mastai's debut novel All Our Wrong Todays. In the first third of Mastai's endearing and creative novel, the reader is introduced to a world so completely different from our own. Instead of geopolitical, economic, and judicial instability and inequality, we find a world made seemingly perfect by technology. The only similarity is the year: 2016.In Mastai's alternate 2016, technology has removed the worst facets of human civilization. Education is tailored to the individual learner, jobs are easily found and distributed based on interest and skills, and humanity colonizes the solar system. We have all the fantastic technology we imagined, including flying cars, instant travel and communication, and unlimited energy. But even in this idyllic utopia, life isn't perfect for everyone.Enter Tom Barren. The son of a genius, Tom floats through life without true purpose. After the tragic and violent loss of his mother, he's given a job in his father's lab. There they dedicate their days to make time travel a reality. But Tom is given a safe position - a role as understudy to the team lead destined to be the first chrononaut - where he can't screw anything up and he might gain some purpose from Penny, the team lead he works with.

However, things go awry. The project is shut down and Penny dead. Tom, heartbroken by Penny's death, breaks into the lab and tests the time machine. His choice, his need to fulfill Penny's wish to become the first chrononaut, inadvertently alters time and space. Instead of his 2016, Tom lands in our 2016. He awakes in a dystopia. The wellspring of human technological advancement was never created. His friends were never born. Technology has stalled. The entire timeline has changed. Yet, his mother is still alive. His father is kind and caring, not the uninterested genius Tom knew his whole life. Tom himself is a renowned architect with purpose. So, maybe things aren't as bad as they seemed. And that's confirmed when he seeks out and finds Penny. Now Tom is confronted with a decision. Does he spend the rest of his life in our dystopian 2016 and enjoy the happiness of life with Penny? Or does he change the past and return to his own purposeless existence of the utopian 2016?Mastai's All Our Wrong Todays is one of the most creative novels of the past year. He's able to describe a futuristic world with ease. He even seemlessly explains away his inability to illustrate how uninvented, fantastic technology. Yet, beneath the sheer creativity, Mastai is able to craft an endearing novel of love, purpose, and responsibility.