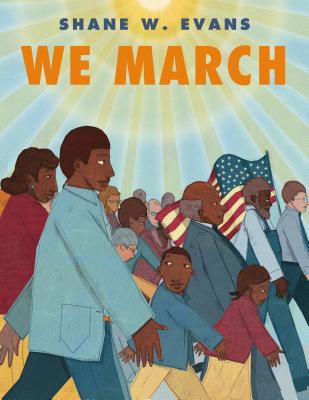 57 Years Later, We Continue to March for MLK

I have a dream that my four little children will one day live in a nation where they will not be judged by the color of their skin but by the content of their character. --Martin Luther King, Jr.

Today marks fifty-seven years since Martin Luther King, Jr.'s historic March on Washington. The March on Washington was a massive protest march that occurred in August 1963, when some 250,000 people gathered in front of the Lincoln Memorial in Washington to protest racial inequality. It was here that MLK gave his famous 'I Have a Dream' speech, with words that continue to unite our nation. We continue to seek and revisit his words and inspiration today.

Inspire your children to stand up for equality with these beautiful children’s books about the March on Washington!  What better way to start discussions with children about one of the most important moments in American history than through a book? Luckily, we have several!

What Was the March on Washington?

On August 28, 1963, more than 200,000 people gathered in Washington, DC, to demand equal rights for all races. It was there that Martin Luther King Jr. delivered his "I Have a Dream" speech, and it was this peaceful protest that spurred the momentous civil rights laws of the mid-1960s. With black-and-white artwork throughout and sixteen pages of photographs, the March is brought to life.

On August 28, 1963, a remarkable event took place--more than 250,000 people gathered in our nation's capital to participate in the March on Washington for Jobs and Freedom. The march began at the Washington Monument and ended with a rally at the Lincoln Memorial, where Martin Luther King Jr. delivered his historic I Have a Dream speech, advocating racial harmony. Many words have been written about that day, but few so delicate and powerful as those presented here by award-winning author and illustrator Shane W. Evans. When combined with his simple yet compelling illustrations, the thrill of the day is brought to life for even the youngest reader to experience.

Who Was Martin Luther King, Jr.?

Dr. Martin Luther King, Jr. was only 25 when he helped organize the Montgomery Bus Boycott and was soon organizing black people across the country in support of the right to vote, desegregation, and other basic civil rights. Maintaining nonviolent and peaceful tactics even when his life was threatened, King was also an advocate for the poor and spoke out against racial and economic injustice until his death?from an assassin's bullet?in 1968. With clearly written text that explains this tumultuous time in history and 80 black-and-white illustrations, this Who Was celebrates the vision and the legacy of a remarkable man.

This picture book biography of Dr. Martin Luther King, Jr. brings his life and the profound nature of his message to young children through his own words.

Martin Luther King, Jr., was one of the most influential and gifted speakers of all time. Doreen Rappaport uses quotes from some of his most beloved speeches to tell the story of his life and his work in a simple, direct way. Bryan Collier's stunning collage art combines remarkable watercolor paintings with vibrant patterns and textures. A timeline and a list of additional books and web sites help make this a standout biography of Dr. King.